Scientists home in on elusive autism genes and the environmental factors that may trigger them. Can a blood test to check for autism in newborns be far behind? 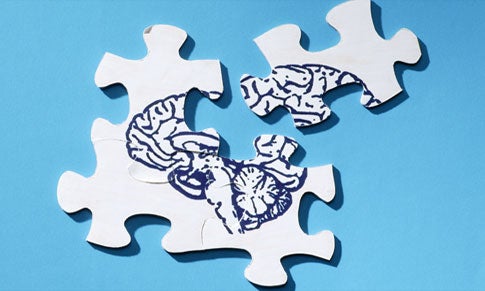 Fixation on puzzles is a hallmark of autism, a brain disease that strikes 1 in every 166 kids. New studies may explain why.

A pair of twins is born, and both infants begin to develop normally. By their first birthday, however, the male sibling has begun to diverge from his sister, showing less eye contact and affection. He often wears a spaced-out expression and fixates on certain puzzles and patterns. By age three, his mounting symptoms lead to a diagnosis that has become disturbingly routine in recent years: autism.

What causes the disease, which now strikes 1 in every 166 children, and why does it affect four times as many boys as girls? Geneticists at the University of California at Los Angeles are closing in on the answers. This spring they announced that they had pinned down the likely location of an autism gene on chromosome 17. The evidence was found only in families with autistic males, indicating a hereditary basis for the disease´s gender bias. Reporting the discovery in the American Journal of Human Genetics, the scientists will next try to find the actual gene among the 50 or so clustered nearby, a painstaking process that could take another year. “If we´re lucky,” says co-author Rita Cantor, a professor of genetics at the university´s David Geffen School of Medicine, “we´ll be able to explain 10 percent of autism.”

To complicate matters, researchers believe that the gene is probably just one of dozens linked to autism, many of which may trigger the disease only if a genetic predisposition is activated by some external factor.

So where does environment come into the picture? Although we have decoded our genome, our “envirome”–everything that influences a person after conception, from parenting to pollution–remains a fragmented riddle. To decipher the envirome´s role in the disease, William Eaton, a psychiatrist at the Bloomberg School of Public Health at Johns Hopkins University, recently helped to conduct a large-scale study involving nearly 700 Danish
children. Some intriguing correlations emerged. Scouring for trends among a host of parameters such as birth weight and socioeconomic status, scientists discovered an increased prevalence of autism both in children with a family history of schizophrenia and in those whose births involved complications such as premature or breech delivery.

Casting an even wider net than the Danish survey, researchers at the University of California at Davis are conducting a study called CHARGE (Childhood Autism Risks from Genetics and the Environment) to scrutinize everything from genes to mercury exposure. “The hope is that we´ll find patterns,” says toxicologist Isaac Pessah, who is director of the school´s Center for Children´s Environmental Health. “We´re not looking for the magic bullet that causes autism.”

Churning through reams of data, the study has uncovered its first pattern: that certain proteins, metabolites and immune-system components in blood samples from autistic children differ sharply from normal ones. Announced in May at the International Meeting for Autism Research in Boston, the discovery could lead to the first-ever blood test for autism in newborns, allowing treatment to begin long before outward symptoms typically occur.

If autism is indeed caused by the complex interaction of genetic and external factors, Pessah believes that eliminating the environmental problems would be easier in the short term than the awesome biomolecular challenge of finding and altering the offending DNA. “I don´t think there´s going to be genetic intervention in my lifetime,” he says. There is only one other human disease, Pessah points out, that rivals autism in complexity. It´s called cancer.