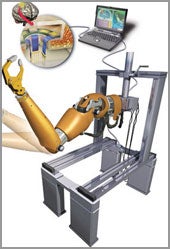 The power of thought just got a lot more powerful. Scientists have created a cranial implant that allows monkeys to control a robotic arm just by thinking about it. Using brain signals, the monkeys persuaded the arm to pick up and feed them chunks of zucchini, cucumbers and apples.

Last winter, neuroscientist Andrew Schwartz and his team at the University of Pittsburgh trained monkeys to think about reaching for food (the animals’ arms had been temporarily restrained). Using almost 200 electrodes inserted into the monkeys’ brains, the scientists recorded neuronal firings in the motor cortex during the imaginary action, and a computer transmitted the data to a robotic arm programmed to respond.

The experiment marks the first time anyone has used a brain implant to directly control a robotic arm in three dimensions that is, moving freely in space. Other scientists have taught subjects to maneuver an onscreen cursor, which in turn directed an arm to move in a single plane. Schwartz is now working to create wireless brain implants that should be ready for clinical trials in humans within two to four years.