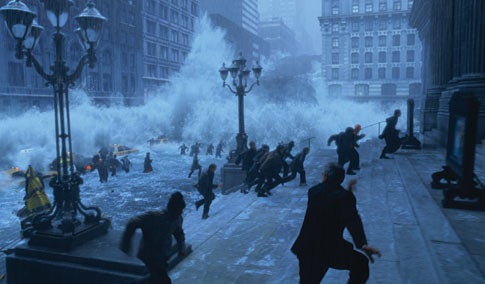 The Day after Tomorrow

In 2004’s The Day after Tomorrow, the science is silly–an ice age descending in days?–but the climatic havoc is sublime. Grapefruits of hail bombard Tokyo. Floods ravage New York. Out-twistering Twister and out-storming The Perfect Storm, the movie wowed audiences as it established a new benchmark for disaster on film.

The Zeus behind much of the mayhem was Sci-Tech Award winner Alan Kapler. As a technical director at Venice, Californiaâ€based
special-effects house Digital Domain, he invented Storm, software that aids designers in generating some of the trickiest visual effects in the business: volumetrics. “Things with hard and defined surfaces, like monsters, are fairly easy to represent in a computer using geometry,” Kapler says. “But wispier things like clouds, mist and water are
incredibly difficult.” Storm excels at rendering these ethereal forms with high-resolution depth, shadowing and lighting. The program also helps to simulate natural events such as avalanches–like the one in the 2002 Vin Diesel action fest XXX–with a real-world mix of control and chaos. The result is bigger thrills for moviegoers, and fewer ulcers for effects gurus.

“Everything I do in computer graphics tends to be nature-based,” Kapler says. For fun, he creates programs to generate seashells, snowflakes and leaves; between movies, he sets off in his van for northwestern Canada or Alaska to hike and fish. In The Day after Tomorrow, his passion for natural phenomena paid off.

To produce the flood sequences, the Digital Domain crew shot 40,000 photographs of Manhattan streets and buildings, assembled them digitally, and then used the company’s hydrodynamic simulation program to bombard the city with the electronic equivalent of Noah’s flood. And that, in some ways, was the easy part.

The key to making the big flow believable, Kapler says, was the
little details–whitewater surging forward, tendrils of liquid exploding skyward, thousands of droplets of spray and mist. To sketch out this aquatic action, the effects team ran “particle” simulations,
generating flows of dots that moved semi-randomly, with parameters to govern water current and velocity and to mimic the effects of wind and gravity. The results were then plugged into Storm, which
transformed each particle into a cluster of larger 3-D pixels called voxels. This alchemy is the software’s essential breakthrough. Computers can handle only a few hundred thousand particles before overloading; Storm’s
voxels conjure an image with
billions of apparent particles.

Kapler didn’t invent voxels, but he devised the memory-
saving compression routines that first allowed them to be used on the scale necessary for big-screen effects. He also made Storm user-friendly. After the artist feeds a few rough instructions into the computer, it uses Kapler’s algorithms to create a seeming infinity of interconnected droplets, each with its own color, shape and internal movement. And he made Storm intelligent, capable of determining where each voxel of water stands in relation to the light source and which other voxels stand in the way. In The Day after Tomorrow floods, water in the main channel appears dark, churning whitewater semi-opaque, and airborne mist virtually transparent. Manually making such lighting and shadowing determinations for each water speck would be like relocating the Sahara with tweezers.

All of this illustrates the irony of visual effects–that some of the simplest things in nature are some of the most complex to synthesize. “We’ve spent our whole lives exposed to water, snow, smoke and dust,” Kapler says. “If they aren’t shaped right, don’t move right, or the shadows aren’t correct, your brain sends you a subconscious message: bad special effect.”