The sci-tech oscar winners wonâ€™t be getting teary-eyed on prime time. But for special-effects lovers, these techie brainiacs are Hollywoodâ€™s little-heralded heroes 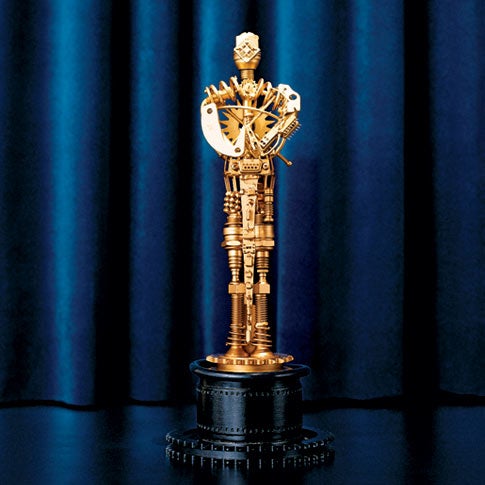 Each February at a modest, Joan Riversâ€free ceremony in Los Angeles, the Academy of Motion Picture Arts and Sciences bestows a cherished set of honors: the Scientific and Technical Awards. These aren´t the Oscars of Tom, Brad, Charlize and Nicole, and that´s OK-let the jocks ride the homecoming float while the whiz kids play Dungeons & Dragons in the basement. Who needs superficial red-carpet glory when you´re leading nothing less than a revolution in filmmaking? Call it Revenge of the Nerds V: Brainiacs Take Hollywood.

In the past decade, the effects budget for a typical blockbuster has ballooned from $5 million to $50 million. As digital effects (DFX) have become more complex and accessible, the barriers between fanciful computer-animated films and ostensibly realistic ones have crumbled. DFX now allow filmmakers to not only manipulate reality, but to build it from scratch.

â€If film directors are painters, the awards are for the people who supply the brushes,â€ says Richard Edlund, chair of the Sci-Tech committee. An invention must be novel to win. Depending on how substantial its influence, it can be awarded a certificate, a plaque or, most glorious of all, an Oscar statuette. The Academy honors technologies rather than specific films and doesn´t favor the latest innovations but instead the ones that have proved themselves in the industry. Historically, the awards have gone to mechanical breakthroughs (lenses, films, set lights), but since 2002, digital technology has held the edge. The Academy has no fixed number of honors to allot, no specific categories like Costume Design or Best Picture. They may pass out one Sci-Tech Oscar or five, laud three computer-animation programs or none.
Here, we focus on five key technologies from the 2004 contestants. A couple won awards, the others didn´t, but together they tell the story of filmmaking´s latest evolution. So join the Academy in a Sally Fieldâ€style salute: We like you, Sci-Tech stars. We really like you.