How did life arise on Earth? 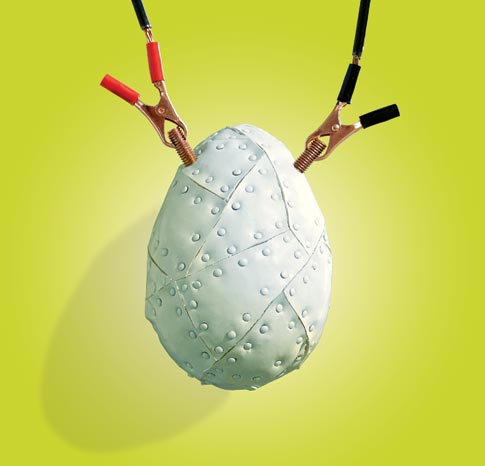 The short answer, says Steen Rasmussen of Los Alamos National Laboratory, is that “nobody has a freakin’ clue.” But it isn’t for lack of trying. During the past century, scientists have kicked around all kinds of theories to explain how a bunch of inanimate primordial molecules on the early Earth turned into what some scientists affectionately refer to as FLO (“first living organism”). Now, in an attempt to retrace those chemical steps, Rasmussen and other investigators are trying to cook up their own simple artificial organisms in the lab.

Whatever FLO looked like, most scientists believe it had to have been exceedingly simple. After all, fossil records show that single-celled organisms were already swimming around 3.5 billion years ago, just a billion years after the Earth itself formed. So one popular theory is that FLO was based not on DNA but on its simpler chemical cousin, RNA. The theory–known as the RNA World hypothesis–arose because of a fundamental chicken-and-egg dilemma: It takes proteins to create DNA, and DNA to create proteins. So how could one form without the other? Jack Szostak at the Harvard Medical School is one of several investigators who are on the hunt for self-replicating forms of RNA called ribozymes. These molecules would have stored genetic information as well as catalyzed chemical reactions, essentially performing the roles of both DNA and proteins.

Szostak has already turned up ribozymes that can copy snippets of RNA but not a whole molecule. To further the search, chemists such as David Bartel at the Whitehead Institute for Biomedical Research are tapping Darwinian evolution: They’re combining and recombining RNA’s chemical building blocks to see whether self-replicating properties eventually emerge.

FLO was most likely surrounded by a container formed from the raw materials found on the early Earth. So Pier Luigi Luisi of the University of Rome and David Deamer of the University of California at Santa Cruz have spent decades experimenting with fatty acids such as the ones that surround living cells, trying to coax them to form hollow vesicles. Luisi and his group are now trying to create a minimal living cell based on this knowledge.

Scientists are also starting to bolt together some of these various parts. In December, Vincent Noireaux and Albert Libchaber of the Rockefeller University reported in the Proceedings of the National Academy of Sciences that they had cobbled together a simple lipid container and outfitted it with basic protein-making molecular machinery. The artificial cell was not truly alive, because it couldn’t reproduce or evolve, but it did churn out proteins for days.

FLO–and the answer to life’s oldest mystery–may not be far behind.