The crazy critters astound us once again 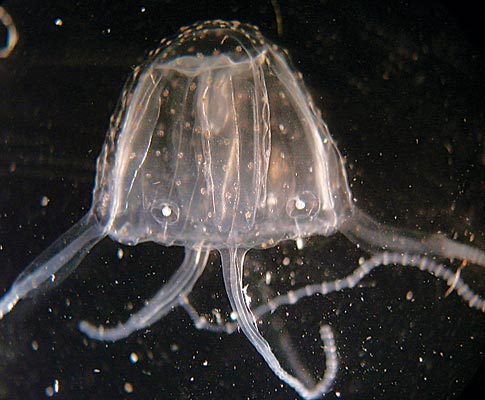 Australia’s irukandji jellyfish is the Viagra of the sea

Voluntary Castration To find its perfect mate, the male Tidarren sisyphoides spider routinely amputates one of its two oversize external sex organs, Tulane University researchers found in February. With a reduced weight, it can run faster and longer in pursuit of the female.

A Healthy Glow Hippos secrete a distinctive red-orange fluid from their skin that acts as a two-in-one antibiotic-and-sunscreen combo, Japanese researchers found in May. The highly acidic compounds in hippo sweat could become the basis for a new range of human
pharmaceuticals.

Live-in Freeloaders Male members of a whale-skeleton-eating worm species in California are the ultimate mooches, scientists at the Monterey Bay Aquarium reported in July. Bacteria in the female worms’ guts help digest fats in the whale bones. The males? They
simply live, parasite-like, inside the females’ bodies.

An Aroma to Die For To capture its favorite prey–beetles–the burrowing owl sets an unconventional fragrance trap, scattering pellets of its nutrient-rich dung at the entrance to its home. Zoologists at the University of Florida noted that the use of scat as a survival aid is extremely rare in the animal world.

Stick with Viagra According to Australian biologists, a sting from the tentacles of the irukandji jellyfish can produce long-lasting erections in humans. The scientists are working to isolate the as-yet-unidentified magic ingredient in the jellyfish toxin but caution that irukandji stings also cause pain and paralysis.

Revenge of the Jilted When the male common frog, Rana temporaria, can’t find a mate, he doesn’t get mad; he gets even, say zoologists from the University of California at Berkeley. After a frog couple leaves their eggs, the spurned Casanova sprinkles the pile with his own sperm in hopes of fertilizing some of the eggs–the first example of such mating behavior in frogs.

Feel the Vibrations Researchers at Stanford University think elephants may be listening with their feet. In June the scientists discovered that elephants can detect low-frequency noise more than a mile away through their feet.

Dit Dit Dit Dah Dah Dah In July, University of Florida scientists announced that longwing butterflies (Heliconius cydno) converse with one another in an elaborate system of Morse codeâ€like clicks. The
butterflies appear to use their clicking
language to coordinate mating liaisons.

Do Dogs Have a Sixth Sense? A Canadian study published in June showed that 15 percent of canines may be able to predict when a child will have an epileptic seizure. The seizure-predicting dogs were accurate about 80 percent of the time. Meanwhile, another experiment suggested that dogs can sniff out differences between healthy urine and the urine of humans with bladder cancer.