For the Earth, the Heat Is On 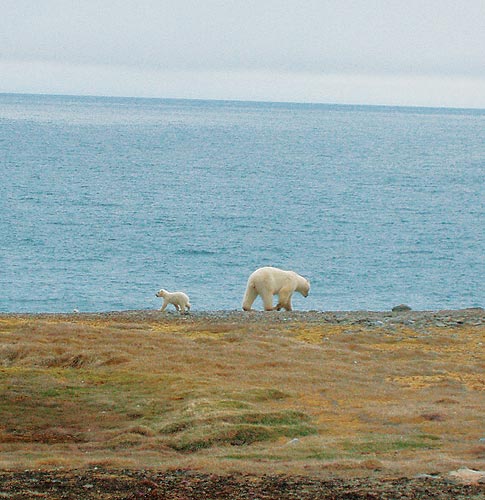 Polar bears were stranded by melted sea ice in the Arctic.

It was the summer of animals gone weird. Alaskan salmon swam up rivers they weren’t born in, their native streams reduced to trickles. Scores of subtropical species, including seahorses and leatherback turtles, migrated into waters off northern England and Scotland. Polar bears were marooned on a remote Arctic island as large patches of what was normally sea ice melted into water. Hundreds of thousands of seabirds failed to breed. The culprit for all this odd animal behavior? A Northern fever: from Alaska to Norway, meteorologists measured record-setting spring and summer temperatures.

In addition to this anecdotal evidence for global warming, there was one hard truth this past year: Carbon dioxide hit record-high levels in the atmosphere. Soaring from an average of 376 parts per million in 2003, readings hovered around 379 parts per million, a jump much greater than the average annual increase of 1.8 ppm recorded over the past decade. The Intergovernmental Panel on Climate Change projects that, if left unchecked, carbon dioxide concentrations will range from 650 to 970 ppm by the year 2100, resulting in a rise of 2.7 to 10.4 degrees Fahrenheit in global temperature.

A heat surge like that is enough to cause today’s worrisome animal behavior to turn tragic, according to two studies published in the January 8, 2004, issue of Nature. Even slight increases in temperature can push species toward the poles or to higher elevations, but for many animals, migration to a cooler habitat is impossible. Scientists calculate that up to one third of the 1,103 plants and animals they studied could plunge into extinction by 2050. If extrapolated globally, more than one million species could disappear because of climate change by midcentury. Meanwhile, warming could flood cities and cause human health problems such as respiratory disease and increased rates of malaria.

But the year also saw new tactics in the effort to stop climate change. In July eight states filed a first-of-its-kind lawsuit against the nation’s five largest public utilities, including American Electric Power and Xcel Energy. The states claim that the utilities, which spew some 650 million tons of carbon dioxide exhaust a year, are damaging–along with public health–forests and crops (recent studies have demonstrated that fields and grasslands exposed to doubled concentrations of carbon dioxide produced reduced yields).

The U.S. remains the world’s biggest carbon dioxide emitter and an opponent of the Kyoto Protocol, which obligates endorsing countries to reduce carbon dioxide emissions. But in a striking shift, the Bush administration can no longer claim that the jury is out on whether human activities are heating the planet. A government-sponsored study released in August supported the view that human action–from driving cars to operating power plants–is primarily responsible for global warming. “North American temperature changes from 1950 to 1999 were unlikely to be due only to natural climate variations,” the report stated.