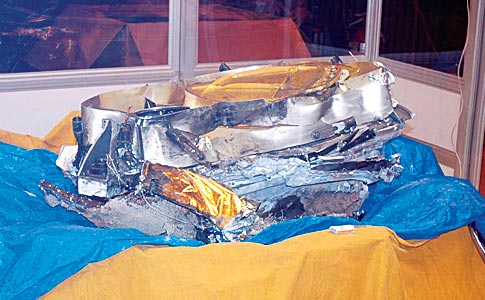 The Genesis probe, after the fall

Brood X Cicadas
After 17 years underground in nymph stage,
in mid-May billions of adult Brood X’ers emerged from their natural hibernation, raring to mate. The shrimp-size insects swarmed the
Eastern seaboard, laid new eggs, and then died by mid-June.

Son of Old Sperm
A healthy baby boy was born in June from what British doctors believe is the world’s oldest sperm. It had been frozen for 21 years by his father, who was afflicted with testicular cancer.

Baby Black Hole
On June 10, new radio scans of a star that
exploded 20 years ago revealed a nascent ultradense core in the
leftover gas shell–thought to be the first black-hole birth ever witnessed.

Cloned Cats
Bengal kittens Tabouli and Baba Ganoush, born on June 12 and 14, respectively, are the first felines cloned using a new, less risky method, in which the adult cell to be cloned is returned to its embryonic state. The “parent company,” Genetic Savings & Clone, will duplicate pet cats commercially for about $50,000.

Human-vs.-Neanderthal Theories
What killed off the Neanderthals 30,000 years ago? Not Homo sapiens. By analyzing 400 dig sites and evaluating past climate through sediment cores, an international team determined that the cavemen simply weren’t savvy enough to survive the increasingly chillier times.

The Yoda of Rodents
Born with a mutation for longevity and dwarfism, the world’s oldest non-engineered mouse died in April at age four. “Yoda was helping us figure out what hormonal and cellular factors play a role in extending life span,” says geriatrics expert Richard Miller.

Francis Crick
After Mendel, Crick was the patron saint of genetics, having uncovered the structure of DNA with James Watson in 1953. He was 88 when he died on July 28.

Genesis Spacecraft
Although the sun probe’s crash-landing on
September 8 was certainly a disappointment, NASA scientists are optimistic that good data can be salvaged from its broken contents.