Racing for the Environment 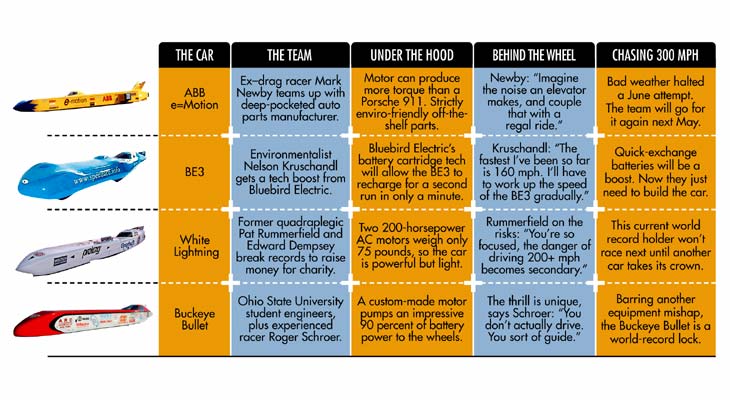 This fall, Ohio State University’s Buckeye Bullet is gunning for an electric-vehicle land-speed world record on the salt flats of Bonneville, Utah, the site of the world’s premier speed events. The Buckeye Bullet’s attempt highlights the leaner, cleaner side of racing, featuring needle-shaped, battery-powered vehicles sprinting at 250-plus mph. Students aren’t the only Ones chasing green speed. Other teams include garage-savvy environmentalists, a former drag racer and a recovered quadraplegic who drives for charity, not just records. And several racers are backed by energy companies in search of better battery technology. But they all have one thing in common: a desire to top 300 mph. In August the Bullet became the first electric vehicle to surpass this feat in a timed mile, clocking in at 308.317 mph, beating the national electric land-speed record of 256.894 mph–unofficially, anyway. A record-breaking run is the average of two timed sprints, and a faulty rear differential prevented the team from racing again. “There’s definitely the feeling of unfinished business,” says Buckeye driver Roger Schroer. “We know the Bullet is capable; we just have to do it.” While the Bullet may be on top for now, it does have challengers. Here’s a closer look at four potential record-setters.