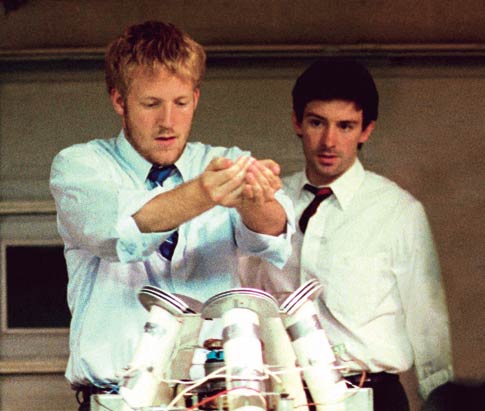 Beware What You Build

In Primer, two engineers unwittingly construct a time machine. After witnessing strange effects with a prototype, they scale the device up to human size.

Forget about jumping back to the age of the dinosaurs. In Primer, a time- travel movie opening this month, the characters barely backtrack a full workday. When Shane Carruth, the writer, director and co-star, set out to make a film about two friends who construct a time machine in a garage, he wanted to offer an unconventional take on the genre. “In other stories, people seem to ‘jump’ from one point in time to another,” Carruth says, which didn’t make sense to him. “If I have to walk to the grocery store, I have to move through each point in space between there and my house,” he says. So he decided to treat time the same way: If his time traveler wants to go back one day, he has to pass through all 24 hours. With full knowledge of that day’s events, he can right wrongs–or make a bundle on the stock market.

In one scene, the main characters, Abe and Aaron, set their device to turn on at 9 a.m. and to run for six hours. Once the machine is activated, time becomes circular inside. Initially the minutes march forward along with the outside world. Then, at
3 p.m., after the allotted six hours, time inside the machine starts to flow in reverse. (How this is possible is talked about in the film but never quite explained.) Whatever is inside the machine is carried back to 9 a.m. on the same day, in the same place.

Primer has stumped many advance viewers, so let’s go over this again.
After setting the machine to switch on at 9 a.m., Abe and Aaron spend their day on the outside, in the normal world. At 3 p.m. they climb inside and wait in the coffinlike box for six hours while time flows in reverse. “Abe and Aaron have to experience each moment–from 3 p.m. to 9 a.m.–as they travel back,” Carruth says. This is hardly a pleasurable experience, but once the six hours are up, they climb out, and it’s morning again. The difference is that they both know what events will unfold that day, including which stocks will climb, because they’ve already lived through it. And as you might expect from a get-rich-quick scheme involving a time machine, chaos ensues.