While some developing nations have embraced e-voting machines, more developed European and Pacific Rim countries have been much slower on the uptake. 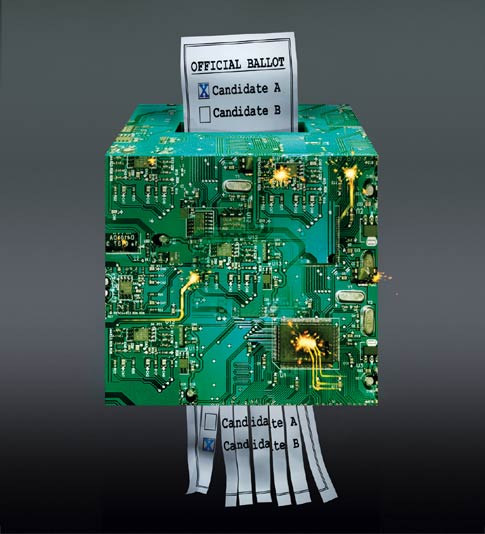 A decade ago, Brazilian Minister Carlos Velloso, president of the Superior Electoral Court, made a speech in which he promised a nation free of election fraud through the use of e-voting machines. Although there’s still room for debate about whether Brazil’s rapid move to e-voting solved all their electron-fraud problems, since 2000 the country’s elections have been conducted entirely on electronic voting kiosks. The self-contained devices can run on batteries for up to 12 hours and are sufficiently rugged to be deployed both in the Amazonian jungle as well as the streets of So Paolo.

Other nations, including Venezuela and India, are also casting their votes electronically. Using e-voting machines with paper audit trails, Venezuelans successfully conducted a runoff election earlier this year, the accuracy of which was validated by international observers, including former president Jimmy Carter. Indian elections featured machines with a special “close” button that allows poll workers to stop the machines from recording any additional votes in case somebody tries to take over the poll booths and engage in electronic ballot stuffing.

While these developing nations have embraced e-voting machines and modified them for their particular needs, more developed European and Pacific Rim countries have been much slower on the uptake. Japan, which has traditionally considered votes legal only when they are written in the voter’s own hand, has allowed e-voting machines in a few small, local elections. But the South Korean government has said that all its elections will be conducted electronically starting next year.

Last year, the European Commission released the results of a study on voting systems that use the Internet and cellphones. Although there were initial difficulties with software installation, participants in the study reported that these bugs were ultimately ironed out and that the final test election they conducted, in Sweden, went off without a hitch. No European nations have yet held official elections using the electronic systems.

Perhaps the most intriguing e-voting technology–at least from the perspective of software security–hails from Australia, where the Australian Capital Territory Electoral Commission is pushing for the use of open-source software in e-voting machines. You can download and audit the software yourself on the commission’s Web site. Even Avi Rubin, the U.S.’s most vocal critic of security in most e-voting machines, can’t complain about this one.