Innovations and steep gas prices may at last kick-start wind energy in the U.S. 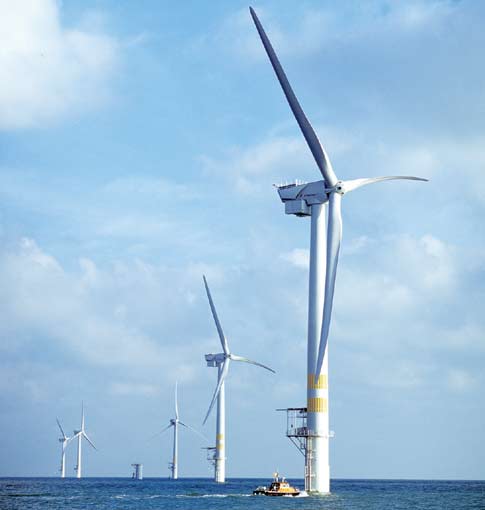 Critics say offshore wind turbines, like these giant propellers newly installed off the coast of Ireland, are eyesores and endanger wildlife.

Next spring, General Electric will inaugurate the Arklow Bank Offshore Wind Park, a wind farm just off the eastern coast of Ireland. The plant is already operating at nearly full capacity, its seven massive 3.6-megawatt turbines cranking out enough electricity for 16,000 households. Arklow Bank is Ireland´s first offshore wind-energy project and Europe’s 19th, with at least 10 more slated to go up in 2005.

The U.S. has zero. Several have been proposed along the wind-whipped East Coast, but if the hurdles faced by the planned 420-megawatt Cape Wind installation off Cape Cod are any indication, windmills won’t be dotting U.S. coastlines anytime soon. Many local residents and officials–including Senator Ted Kennedy–say that the spinning propellers, anchored in the seabed six miles out, would spoil the view, impede navigation, and threaten birds. “We’re probably going to see controversy over any offshore site,” says Tom Gray, deputy executive director of the American Wind Energy Association.

Meanwhile the nation possesses practically boundless land-based wind resources that it’s only begun to tap. Wind farms in 30 states currently provide less than 1 percent of the nation’s total electricity demand, but according to the U.S. Department of Energy, there’s enough harvestable wind to light up the whole country. The actual goal of the wind energy industry is less lofty yet still ambitious: to supply 100 gigawatts (about 10 percent of the projected national capacity) by 2020.

Hitting that number will require not just harnessing more of the stiff 18-to-20mph winds that whistle through Rocky Mountain states but also the lighter 12-to-18mph breezes that sweep across vast swaths of the Great Plains and upper Midwest. Wind energy firms are developing efficient turbines that use multiple generators and strong, lightweight carbon-fiber or carbon-glass-hybrid rotor blades. Such upgrades will result in higher output wattage and lower production costs–and the latter are already on par with natural gasâ€burning power plants. (Solar power still costs several times as much.)

But the real limit to wind power expansion isn’t the turbine output; it’s the proximity to the power grid, experts say. Countless remote locations that possess good wind lie far off the grid, leaving wind farm developers, governments and utility companies to squabble over who will pick up the tab to string a high-voltage connection to civilization. “If the first 50-megawatt wind farm to go into Nebraska has to pay for the cost of the transmission line to Chicago, then it’s not going to get built,” Gray observes.

Right now, virtually nothing is being built while companies await the renewal of the federal Production Tax Credit, which provides key incentives to green-power developers. It expired late last year, and if Congress renews it this fall, projects in various states totaling at least 2,000 megawatts are slated to break ground. The largest, a 310-megawatt installation planned for two sites in northern Iowa, will be the biggest land-based wind farm in the world.

Offshore, there’s no limit to what could be set up once developers devise a stable, economical deep-water platform–possibly tethered to the ocean bottom–that could be placed far out at sea, where the neighbors won’t complain and an estimated 900 gigawatts’ worth of air power begs to be harvested. Robert Thresher, director of the Department of Energy’s National Wind Technology Center, thinks a workable system is less than a decade away. Transferring energy to shore could be costly, but “the technology’s doable,” he says.