Motorcycles thrilled civilians first. The military then tapped the nimble bikes for use in combat and reconnaissance. 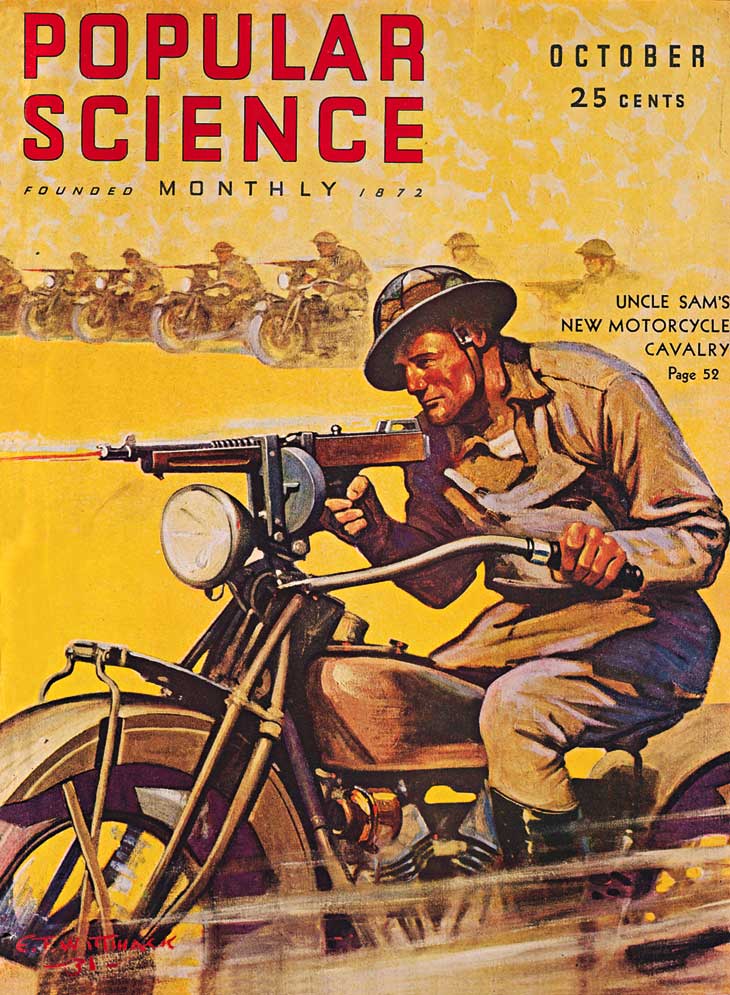 “Spitting death from machine guns,” we wrote, motorcyclists in the “first mile-a-minute army” were part of a mechanized force that replaced the cavalry when it became clear that horses were no longer fast enough to compete in modern warfare. Sparsely used in direct fighting, motorcycles yielded to jeeps by World War II as the versatile vehicles of choice for operations in rough terrain. By then, though, motorcycles already had three decades of history with the military–Gen. Pershing pursued Pancho Villa on a Harley-Davidson in 1916, just 13 years after the first civilian Harley rolled out of a small wooden shed in Milwaukee. The U.S. military bought about a third of the Harleys produced in 1917. In World War I, U.S. and European armies used motorcycles as reconnaissance and messenger vehicles as well as for combat, communications and transportation. Today motorcycles still operate in combat zones, moving dispatches and medical supplies through Iraq and Afghanistan. For more military-to-civilian tech crossovers, see page 44.–christina bryza

Other stories from the October 1931 issue:

Viruses Flourish
Arthur I. Kendall of Northwestern University grew cultures of influenza and yellow-fever viruses in a slurry of pig intestines. Scientists had previously tried unsuccessfully to cultivate viruses on gelatin.

World’s Largest Seaplane Makes Test Flight
In 1931 a 38-passenger seaplane–with a 114-foot wingspan, it was the largest in the U.S. at that time–flew over Long Island Sound. Created for Pan American Airways, the Sikorsky S-40 was “equally at home on land, in the water, and in the air,” we wrote. Its paltry speed and range probably explain why only three were ever built.

A Patent for Plants
After a 1930 patent law put plant breeders on the same footing with inventors, Henry F. Bosenberg was granted Plant Patent no. 1, for an ever-blooming rose called New Dawn. The law applied only to plants made from cuttings, not those grown from seeds.

Electric Table Brings Food, Removes Dishes
During the heyday of early labor-saving contraptions, French engineer Victor Marmonier designed a mechanized serving table. Press a button, and a movable centerpiece laden with food emerged from the kitchen, stopping at each diner so that a rotating arm could dole out dinner.