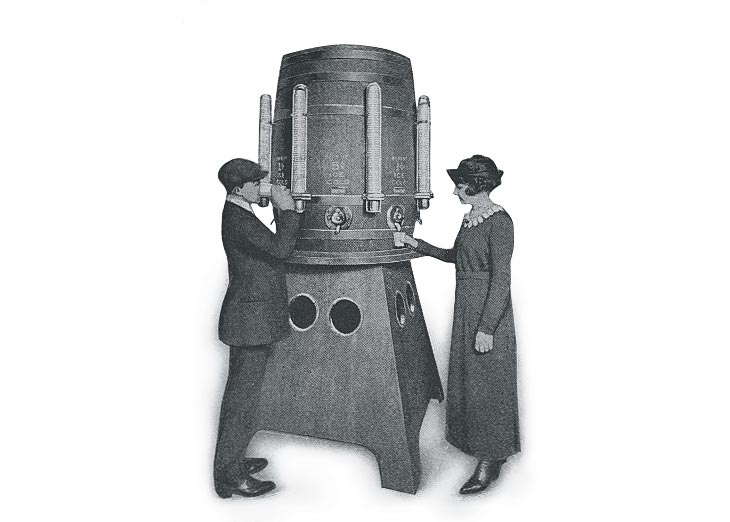 “When this drink dispenser is placed in a busy locality, as much as four hundred dollars has been earned by it in a single day.”

“Plot and plan, scheme and engineer as he may, the crooked ward-heeler cannot discover a way of cheating the machine,” PopSci wrote in 1920, urging the widespread adoption of mechanized voting as an antidote to Tammany Hallstyle election fraud. The gear-and-lever voting machine seemed to ensure a fair and scientific tally. Although it had debuted two decades before we featured it on our cover, in 1920 it was used in only 17 states. By the 1960s the machine predominated in U.S. elections. But by the ’80s, it had fallen from favor because of serious shortcomings: It lacked a paper trail, had in fact proved to be susceptible to tampering, and broke frequently. Now, as officials rush to install electronic voting equipment for this month’s presidential election, experts warn that e-voting machines may possess the same drawbacks as their mech-anical predecessors. “Wow,” UC Berkeley computer security an-alyst David Wagner says of PopSci’s early enthusiasm. “Replace the word ‘mechanical’ with ‘electronic,’ and we’re right back to today.”

Other stories from the November 1920 issue:

Live Forever–Why Not?
Doctors reportedly rejuvenated an old goat by giving it a transplant of glands from a spry donor. Ever cautious, we nevertheless predicted that our readers wouldn’t “see the next century.”

The Soft-Drink Fountain That Takes Care of Itself
A large oak barrel equipped with spigots and filled with a cool beverage was the latest example of an increasingly popular novelty: the coin-operated vending machine. “When this drink dispenser is placed in a busy locality, as much as four hundred dollars has been earned by it in a single day,” we enthused.