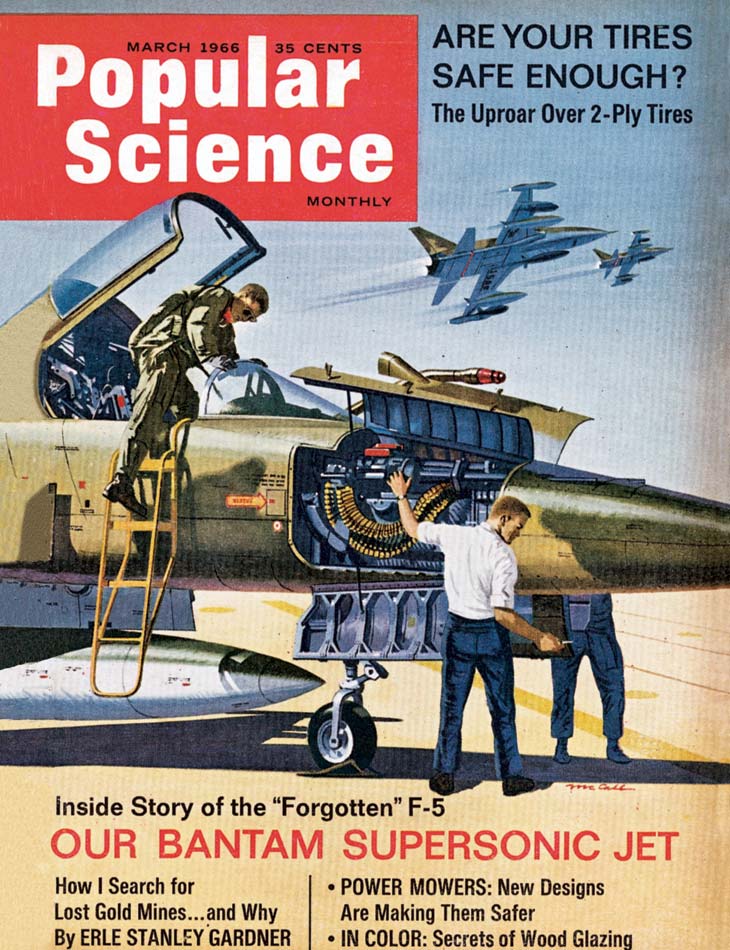 In March 1966, we wrote that the Northrop F-5 supersonic fighter (below) had been plucked from obscurity–it went straight from Air Force training grounds to the war in Vietnam. The F-5 had been developed a decade earlier to replace aging F-84s and F-86s in countries receiving U.S. military assistance; at home, though, it was eclipsed by “supersophisticated fighter-bombers” like the F-105 Thunderchief and F-4 Phantom. But the F-5s proved their worth when a squadron took flight in Vietnam. They “looked like toys,” one pilot said, but their small size and maneuverability enabled them to follow ground troops into combat, use sod fields as runways, and outfight faster aircraft. Recently, the F-5 has been resurrected yet again–it’s being used to test aircraft designs meant to
suppress sonic booms (see “Whooshhh!,” page 56).

Other stories from the March 1966 issue:

Can Pills Make You Smarter?
Maybe, if you’re a rodent. Administering a magnesium compound to rats increased their learning ability fivefold.

Electric Socks Warm Feet
Heating coils were woven into these electric foot-warmers and connected by wires to batteries on the wearer’s belt. Ice skaters found the socks useful; today, modified versions are marketed to hunters.

Blades Stored in Helicopter
Lockheed designed a helicopter that could stop its rotor blades and fold them into the fuselage for fixed-wing flight. This one was never built, but the desire for such a craft is evergreen (witness the troubled V-22 Osprey).

Sick Robot
To train medical students, engineers at USC and Aerojet-General Corp. developed a robot with a pulse and heartbeat that simulated human reactions to various maladies.

Superinsulated Blanket
The aluminized Mylar emergency blanket, now ubiquitous in emergency kits around the world, evolved from technology that was developed for spacecraft insulation.