His device lets him look inside the brain to see where memories reside. 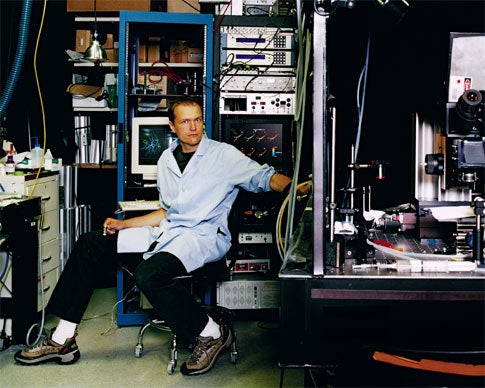 Caught in the Act

Karel Svoboda uses this device to view the brain cells of living mice.

When we make a new memory, where is it stored in our brains? The question consumed Karel Svoboda for years. Others had approached the problem in two ways: They used noninvasive technologies such as MRI and PET scans to watch the living brain in action; for a closer look, they dissected brain tissue under the microscope.

Svoboda wasn’t satisfied. The first technique was too broad–it showed which regions of the brain are active, not what was happening at the cellular level. And the second technique–examining a disconnected neuron in a culture dish–was like studying a single transistor to understand how a computer works. He wanted to observe a single brain cell, or neuron, in a living creature over time. The tools didn’t exist. So five years ago, he set out to build them.

Svoboda, 38, and his Long Island, New York, team needed a microscope powerful enough to image synapses, the spaces between neurons where the cells communicate. Synapses are one billionth the size of a rice grain, so the resolution required was 1,000 times that of an MRI. Svoboda based his design on cutting-edge two-photon laser scanning microscopy. Next he obtained mice engineered to express a green fluorescent protein when their neurons are activated. Finally, he figured out how to implant a tiny piece of glass into a mouse’s skull–creating a window onto its brain.

To expose mice to a new learning experience, Svoboda trimmed their whiskers so that they had to search harder for food and water. The animals’ brains were scanned before and after the activity. Svoboda found that as the mice learned, their neurons sprouted more of the branches that provide extra surface area for receiving signals. And he was stunned to see new synapses appear. This contradicted the mainstream view that neural circuitry is fixed after childhood and synapses no longer form.

Once the mechanisms of memory creation are better understood, the implications will be vast. Researchers may learn to repair the ailing memory-formation system in Alzheimer’s patients and others. Says Rutgers neuroscientist Gyorgy Buzsaki, “Svoboda’s work will likely have an indirect impact on almost every psychiatric and neurological disease there is.”