His complex equations describe the havoc wreaked by catastrophic collisions. 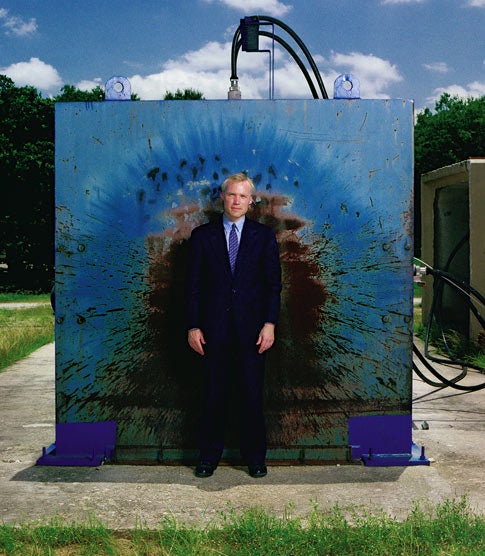 James Walker at the hypervelocity facility, where impacts occur at 25,000 mph.

In a sense, Walker is updating Newton’s second law of motion: Force equals mass times acceleration. In Newton’s theoretical universe, colliding objects retain their original shapes (think of two billiard balls), but in the real world, things don’t always happen so neatly. Superfast bullets crumple on impact, and ceramic-based body armor dents or shatters in a variety of ways. Computing the forces involved is mind-bendingly complex–so complex, in fact, that until recently, no one had bothered to do the math. Engineers have taken the “shoot-and-look approach,” says physicist Charles Anderson, Walker’s boss. “What James has done is to bring some real rigor to this field.”

The beauty of Walker’s equations is that to predict an impact’s outcome, all you have to do is plug in variables–size and velocity of the projectile; angle of impact; density and elasticity of the target–and set a computer humming. In 1995 he and Anderson published a seminal paper, detailing what is now known as the Walker-Anderson model, that describes how a bullet penetrates armor. Now he’s creating mathematical models to describe how ceramics shatter. Using those tools, the makers of body armor will be able to investigate any number of materials and designs without having to build each one and blast it at a shooting range.

Change the bullet to a foam block and the ceramic target to the space shuttle’s wing, and you have essentially the same physics problem–one that NASA wishes it had spent more time pursuing before the Columbia disintegrated last year. During the accident investigation, workers at Walker’s lab shot large gas guns at shuttle materials to confirm the theory that a dislodged piece of foam insulation mortally injured the craft’s left wing. Walker, 40, is now writing equations to describe how the shuttle would react to being hit by a variety of potential debris. Thus armed, aerospace planners will be able to anticipate a suite of possible–and even seemingly impossible–collisions and determine whether they would be catastrophic. NASA is awaiting Walker’s results before recertifying the shuttle for flight.