A Hollywood ending for a comp-sci guy: his graphics software goes to the movies. 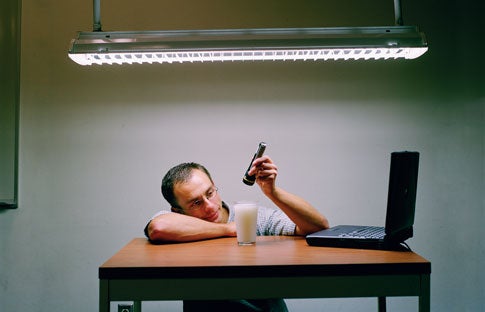 “See this?” says Henrik Jensen. He clicks a mouse button, and an onscreen marble bust starts to rotate. The spinning torso has a subtle, almost intangible glow. Thanks to complex computer algorithms Jensen devised, it appears uncannily real. “When you look at materials closely, you realize that light is making something happen under the surface,” Jensen explains, “and then you can try to replicate it.”

Jensen’s ability to translate the play of light on surfaces into digital code has not only secured his status as an academic computer scientist; it has taken him on a red-carpet ride, earning him credits on films such as Terminator 3 and Shrek 2. In February he received a Technical Achievement Award from the Oscar committee at a lavish event where movie stars mixed with techies who, like Jensen, had serendipitously “arrived.” “We’re more at home in T-shirts than tuxes, I think,” he says of his peers, “but now I brag to all my friends that I got to spend Valentine’s Day with Jennifer Garner.”

Graphics-oriented computer code traditionally described how light bounces off an object’s surface, producing the flat, hard-edged look of many computer-generated films and video games. But a few years ago, Jensen, now 34, had a geek eureka moment: “I was playing with a laser pointer,” he says, “and noticed that the beam of light went all the way through a marble slab, emerging as a red glow on the other side.”

To achieve verisimilitude, Jensen starts with the material he wants to depict, such as skin, milk or stone. He illuminates the surface with a focused beam of white light and observes how the light is absorbed, scattered, and reflected. He captures this with a video camera and then, through computer analysis of the images, he gathers data points–how deep the light penetrates, how the color of the light changes as it passes through the material–which he integrates into his algorithms. To make the technique efficient, Jensen developed diffusion and scattering formulas so that graphics engines won’t get bogged down in the task of rendering individual photons. High-profile special-effects studios Pixar and Industrial Light & Magic went for Jensen’s technique as soon as they heard about it, and the result is the amped-up realism of Gollum in the Lord of the Rings films and Dobby in Harry Potter and the Chamber of Secrets.

Observation is Jensen’s touchstone. When rendering chicken, yogurt or other foods, he makes oddball grocery-store runs. To re-create the curling, dissipating look of smoke and fire, he studied the chemical composition of the gases in a blaze. He’s currently trying to duplicate the way light scatters on human hair–a perennial challenge for animators–as well as the microscopic fuzz on the surface of plant leaves. He is also building software that architects could use to simulate the effects of a planned lighting scheme on surrounding spaces. “The real world is what inspires me,” he says, “and I’ve got plenty of material to work with.”