A reader asks: Is it true that CDs can disintegrate after 20 years? How long will my digital photos last? 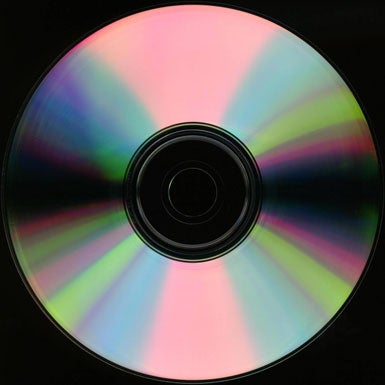 Yes, CDs sometimes disintegrate within a decade or two, but with proper handling and the use of higher-quality discs, your digital photo album should last a century. The breakdown of discs, known as CD rot, begins with poor care: scratches, bending the disc as you remove it from its case, damage to the edges. But these slight nicks and fractures don’t make rot inevitable. You can avoid it by using CDs coated with gold rather than the more common silver. The science involved here is simple. A recordable CD has three key layers: the substrate, onto which the data is stamped; a silver or gold coating that reflects the laser reading the disc; and a protective lacquer. If the lacquer is scratched away, air will get through to the reflective coating and, with silver CDs, eat away at it through oxidization–oxygen molecules bond to the coating and change its chemical structure, corroding it. Gold, on the other hand, doesn’t oxidize, which makes these discs more durable.

If your discs do endure, and you’d like your descendants to browse through your photos, you might want to consider saving an old laptop too, because CD/DVD drives will be obsolete by then. At the same time, it might not be worth the trouble; the answer to whether or not your computer itself will last depends on who you ask. Dell estimates that its computers, if stored properly, will still fire up in 100 years so long as you pull out the batteries, which contain materials that can oxidize and corrode other components. Even so, there’s a chance that computer chips won’t last that long. Jeff Rothenberg, a Rand Corporation computer scientist, explains that a process called metal migration, during which metal ions are pushed out of place by electric currents, can cause the circuit connections in a chip to fail.

Now, if you want to save your photos for, say, a millennium, your options start to thin. While they won’t be able to store your digital photographs, HD (high-density) Rosetta nickel chips can fit 196,000 pages’ worth of physical images or text onto their two-inch-square surfaces–each page reduced to a micron in width–and researchers at Los Alamos National Laboratory have estimated that the chips should last for at least 1,000 years. The process, which has already been used as part of the European Space Agency’s Rosetta mission, is simple: An ion beam would etch your photo into the chip’s surface, and the result could be viewed with a microscope. And here’s where the real fun starts. Using HD Rosetta chips, a company called Team Encounter is offering customers the opportunity to send a photo of their choice, along with a short message, into space onboard a solar sail spacecraft (for one low price of $25!). The company hopes to sell 4.5 million kits. Of course, no one has ever flown a solar sail spacecraft successfully. But isn’t the prospect of sending your favorite photos off to alien civilizations worth the cash? No? Well then, maybe you’re better off investing it in some of those gold-coated CDs.