Using DNA as his tool kit, he invented a new way to make chemicals. 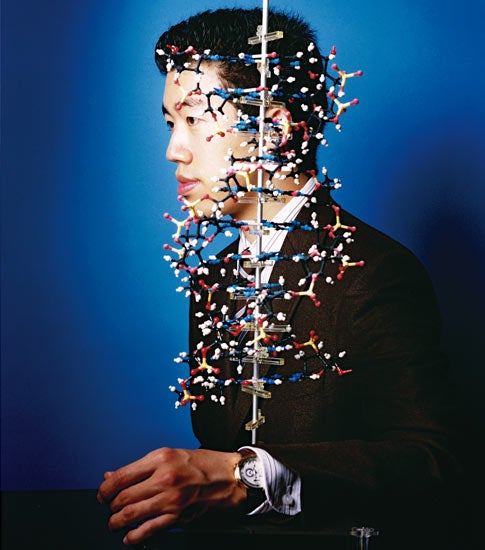 David Liu didn’t want his cats to be bored while he worked long days in the lab. So a few months ago, he did what any enterprising amateur inventor in his position would do: He whipped out his Lego set and built a motorized, heat-sensing, stuffed-mouse-flinging catapult to keep his kitties entertained. “They love it,” he says.

When Liu was still a graduate student at UC Berkeley, he had a different kind of tinkerer’s epiphany. Nature, he observed, employs combinations of just four DNA building blocks to make the thousands of proteins that orchestrate the complex workings of the human body. Hmm, he wondered. DNA. Lego. Aha! Would it be possible to use those four DNA components to encode not only proteins but all sorts of other molecules as well?

Liu got started on the idea in 1999, when he became a Harvard professor, and within two years he had developed a brand-new way to create man-made chemical molecules. His technique relies on the natural tendency of DNA strands to pair together like a zipper. DNA is a double-stranded molecule composed of four kinds of nucleic acids: cytosine, guanine, thymine and adenine. Unpaired adenine always seeks out and bonds with thymine, and vice versa. The same is true of guanine and cytosine.

By capitalizing on this fundamental attribute of DNA, Liu, 31, is able to program the outcome of chemical reactions. Traditionally, scientists initiate reactions by combining the starting materials in a flask, where the molecules randomly bump into one another. What results is the desired product, plus a host of unwanted products created by unintended side reactions. Scientists must then separate the desired molecules from the mix, an expensive and time-consuming process. Liu’s technique gives him a much greater degree of control. Before throwing his raw ingredients together, he attaches each one to a piece of DNA. The ingredients that he wants to react, he attaches to complementary bits of DNA; the ingredients that he wants to keep away from one another, he attaches to nonmatching DNA. When his tweaked ingredients are combined, the desired molecule forms. Liu’s technique enables him to run several sequential reactions in a single beaker all at once.

For now, the process will let chemists produce already known and brand-new molecules more efficiently. Down the line, though, it could also be used to search for new medicines, as well as molecules of importance to agriculture and other industries.