Book of the month: Ghosts of Vesuvius 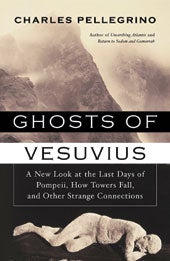 Sometimes it takes an outsider to bring new perspective to a field of study. Charles Pellegrino has made a career of this, skipping with omnivorous intensity between volcanology, archaeology, astrobiology and paleontology.
In his new book, Ghosts of Vesuvius (William Morrow, $26), Pellegrino throws them all in and then some, tracing the physics of destruction at Pompeii back to the origins of the universe and forward to the fall of the twin towers on 9/11.
The eruption of Mount Vesuvius, which buried some 2,000 Romans under several stories of ash and rocks in a.d. 79, is the focus of the book, but the author hardly confines himself to a single topic. In jumping from volcanic eruptions to stellar
explosions, he comes across as a sort of bushwhacking polymath, combining his mastery of scientific detail with a vivid imagination–even if certain questions might be better left for another book. (Do we really need to dwell on the Gnostic gospels?)

The most fascinating details are the scientific connections between cataclysmic events. For example, much of the physics involved in the Vesuvius event also dictated the collapse of the World Trade Center. The forces at work were remarkably similar, including roiling clouds of debris traveling at up to 160 miles an hour and pressures of 3 to 9 tons per square inch–equivalent to the force of a speeding .38-caliber bullet. And Pellegrino deftly explains how the collective force of tons of rocks or dust-laden air can crush one structure yet leave its neighbor eerily untouched. The ghosts in the title emerge heartrendingly in the book’s closing pages, in which survival accounts of the carnage on September 11th provide a human view of the incredible violence of massive disasters.