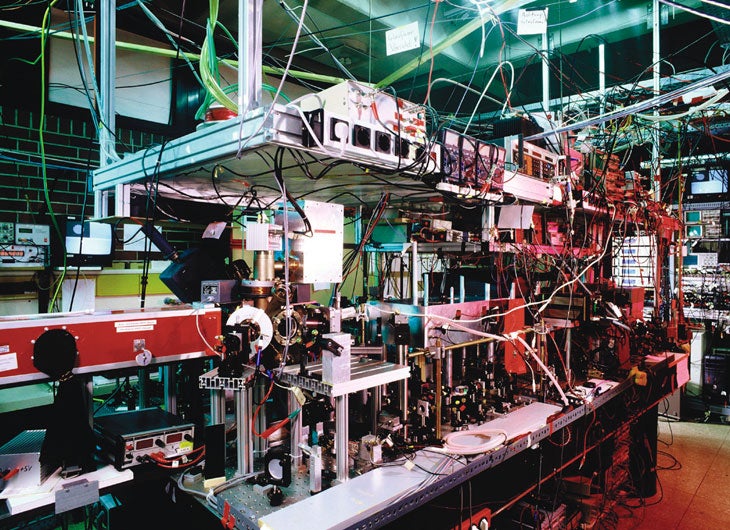 by C. Lackner, Institute for Experimental Physics, University of Innsbruck

Your desktop quantum computer? Not quite. but scientists say this monster contraption housed at the university of innsbruck in austria is a promising start. the device is the first to teleport data from one atom to another.

The Vulcan ears of Star Trek fans perked up this summer when two research teams announced that they had successfully performed teleportation. But the scientists hadn’t beamed William Shatner to Pluto (alas); their feat was solid-particle quantum teleportation, which doesn’t transport matter itself but instead transmits the quantum state of a single atom to another atom without a direct link between the two. This, experts say, is a breakthrough in the march toward the first quantum computer, a still theoretical machine that could take seconds to crunch the same numbers that today’s best processors chew on for years.

Quantum teleportation–the instant transmission of information–is conducted through a
phenomenon called entanglement, the mysterious connection between paired particles in which a change in one particle instantly causes the same change in the other, regardless of the distance between them. The experiments, which took place at the National Institute of Standards and Technology (NIST) in Boulder, Colorado, and at the University of Innsbruck in Austria, used three ions and one set of entangled
particles to transfer the quantum state of the first ion to the third with help from the second.

Scientists at the California Institute of Technology demonstrated quantum teleportation of light photons several years ago, but this is the first time solid matter has been beamed. The latest success is “a major step forward,” says Carl Williams, chief of NIST’s atomic physics division. The end result–in perhaps 25 years, Williams says–might be a new type of computer that replaces traditional binary bits (1’s and 0’s) with quantum bits, or qubits, which would transmit and process data using entanglement instead of circuits. A mere 80 entangled qubits will pack an impossible 151 trillion gigabytes of processing power–roughly correlated, 2.3 trillion times more than today’s best 64-bit architecture.