A Symphony Beneath Your Skin?

One scientist turns up the volume on cellular chatter. 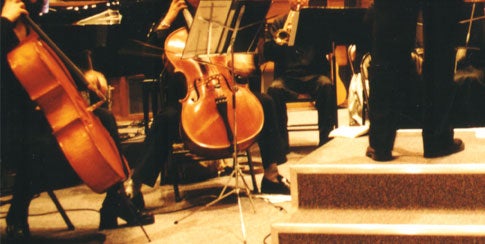 Walk into Jim Gimzewski´s UCLA laboratory, and the first thing you´ll notice is the music thumping out of the speakers. It´s a New Age?y, rustling kind of melody punctuated by a rhythmic drumbeat. You can´t quite dance to it, but it has its own hypnotic allure. The musician? A five-micron-long yeast cell. And the tunes are the extremely amplified vibrations emanating from within the cell. â€If you were to shrink down to the cell´s size, it would be like holding a transistor radio to your ear,â€ Gimzewski says. A nano-scientist, not a biologist, by training, he stumbled upon the faint tunes while testing an ultrasensitive probe designed to image cell surfaces. Whenever he touched the probe´s
nanometer-size tip to the outer edge of a yeast cell, the tip would begin
vibrating. On further study, Gimzewski realized that the probe was acting
like a microphone, picking up about 1,000 vibrations per second from the
cell. Interesting, sure, but does the noise serve a purpose beyond entertaining curious scientists? Gimzewski suspects that sick cells may sound different than healthy ones. If that´s the case, he says, nano-acoustical sensors could one day help doctors diagnose disease.