From crustacean companions she learns the ups and downs of animal motion. 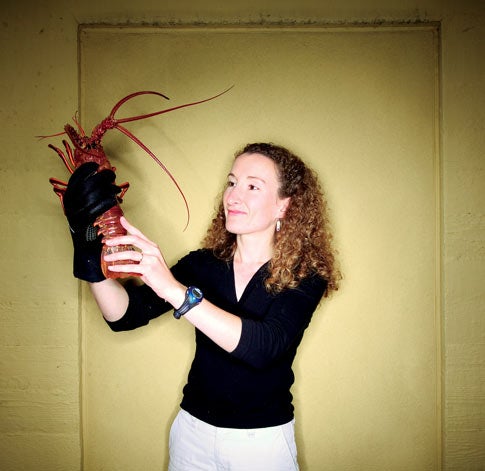 Sheila Patek studies the fastest kick in the animal kingdom.

Why does a 31-year-old biologist spend her days observing, cajoling, and battling crustaceans? Because from them she gets insights into the physics of animal movement. Patek has parsed the mechanics of the odd antenna twitches that lobsters use to make noise and is helping develop a physiology-based method to predict what each lobster species (even extinct ones) would sound like. Recently she proved that the peacock mantis shrimp has the fastest kick in the animal kingdom.

When Patek got to Berkeley in 2001, she planned to study how shrimp make sounds. But she got distracted one day when she saw a hungry shrimp whack open a snail’s shell. It was a startlingly swift wallop; Patek wanted to figure out just how fast. “I read the classic mechanics papers and noticed that something was missing,” she says. “Muscles can’t store that much elastic energy.” She spent weeks dissecting shrimp legs and ultimately hypothesized that a small, Pringle-shaped structure on the shrimp’s foreleg–which another researcher had rather weakly suggested was “an antenna-resting device”–served as a spring, storing energy as the shrimp winds up for a kick. Next Patek needed an ultrafast video camera to catch the spring in action, but she didn’t have $3,000 to rent one. She convinced a BBC television crew to help out. After training the normally shy shrimp to perform their ninja hijinks before the camera’s lights and reviewing the film in slow motion, she and colleagues determined that the shrimps’ legs shoot out at up to 51 mph.

Patek’s research remains decidedly “pure,” but others in her field, inspired by the natural world, have created adhesives that mimic gecko feet
and exoskeletons modeled after ants. By studying how flies hover and cockroaches run, they hope to build better robots. Or, based on the acute hearing of a tiny
parasitic fly, inconspicuous hearing aids.

Speaking of ears, Patek is straining to detect the faint sounds emanating from Clarisse, noises biologists believe lobsters use to startle predators. “You can do better than that,” Patek chides, and with a flick of antennas, the lobster gives off a loud braap! braap! Patek grins. Thank you, Clarisse.