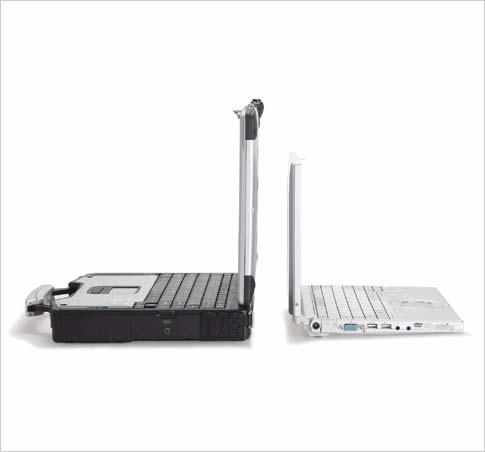 When Panasonic Toughbooks go to war–the company is the leading supplier of ruggedized military laptops, with more than 10,000 computers deployed in Iraq–they must withstand being sprayed by saltwater, shaken by mortar fire, and run over by Humvees. Certification involves an intense gauntlet of dropping, dousing, cooking, cooling and shaking. “If you want to play in the rugged market, you have to meet or exceed these requirements,” says Jan O’Hara, Panasonic’s director of federal sales.

The bullmastiff of the military Toughbook breed is the 29, while the new ultrathin, 2.8-pound civilian offshoot W2 epitomizes what the company calls “business rugged.” Both models have magnesium-alloy cases (20 times as strong as plastic) but the 29’s is slightly thicker. And both have steel-and-gel-encased hard drives for shock resistance, but only the 29 has sealing aluminum port protectors, and only the 29’s keyboard is waterproof. Civilians can purchase 29s–if they’re willing to drop $3,500 on an eight-pound machine, that is–but they won’t have military-specific features like software to track enemy positions and transmit encrypted data. Would a W2 stop a bullet, like a fully ruggedized 29 did last year in Iraq? Not a chance.