How Long Will the Oil Age Last?

Geologists say the end is nigh. New recovery tech may tell a different story. 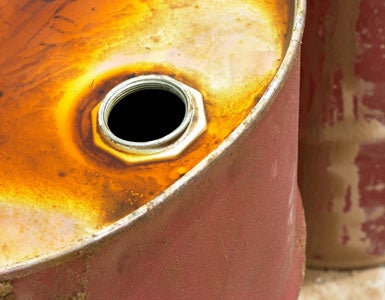 Quick, how many years will it be before the world runs out of oil? Don’t know? Join the club. Actually, choose one of several clubs, each of which vehemently disagrees with the others on how much usable crude is left on the earth. The question is far from an academic exercise: This year oil hit a near record-high $40 a barrel, and Royal Dutch/Shell Group downgraded its reserves by 4.5
billion barrels.

While consumers pay for perceived shortages at the pump, scientists and economists struggle to reach consensus over “proven oil reserves,” or how much oil you can realistically mine before recovery costs outstrip profits. Economist Leonardo Maugeri of Italian energy company Eni fired up the debate this May with an essay in Science that accused the “oil doomsters” of crying wolf.

Chief among the pessimists is the Association for the Study of Peak Oil, a group of European scientists who estimate that maximum oil production around the globe will peak in 2008 as demand rises from developing economies such as China. “If you squeezed all the oil in Iraq into a single bottle, you could fill four glasses, with the world consuming one glass of oil each year,” says physicist and ASPO president Kjell Aleklett. “We’ve consumed nine bottles since oil was discovered, and we have another 9 or 10 in the refrigerator. How many more are there? Some say five or six, but we say three.”

Others believe, like Maugeri, that the number of glasses is virtually limitless. John Felmy, chief economist at the American Petroleum Institute, argues that peak oil-production estimates are so far off that for all practical purposes we might as well act as if oil will flow forever. “Ever since oil was first harvested in the 1800s, people have said we’d run out of the stuff,” Felmy says. In the 1880s a Standard Oil executive sold off shares in the company out of fear that its reserves were close to drying up. The Club of Rome, a nonprofit global think tank, said in the 1970s that we’d hit peak oil in 2003. It didn’t happen.

If there is an end to the debate, advanced oil-recovery technologies will most likely find it. A new seismic survey technique, for instance, sends sound waves of varying
frequencies thousands of meters belowground. Microphones arrayed aboveground record the reflected signals, and computer software models a 3-D portrait of possible oil hot spots. The surveys have now added a fourth dimension, creating a time-lapse simulation of fluid movements.

Biotechnology, too, is keeping the black gold flowing. University of Alberta scientists are searching for microorganisms that could dilute viscous, hard-to-recover oil and make it flow more freely.

“Technology can help push peak oil production further and further out,” says Satish Pai, vice president of oilfield technologies for Schlumberger Limited. But only time will tell if it’s enough.