A gas-powered robotic uniform inches closer to the battlefield. 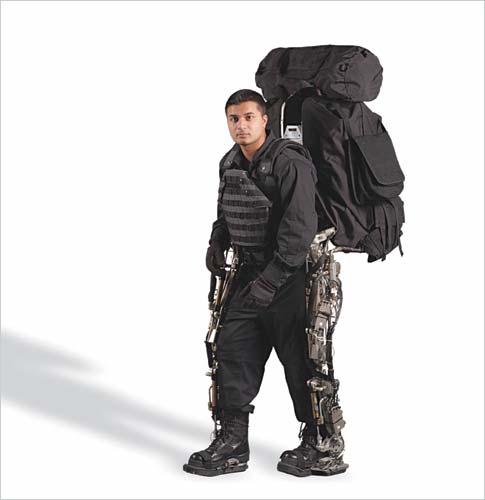 The military garb designed by mechanical engineer Homayoon Kazerooni at the University of California, Berkeley, is anything but standard issue. Kazerooni’s 90-pound battlesuit, dubbed BLEEX for Berkeley Lower Extremity Exoskeleton, consists of a pair of robotic legs and backpack-like frame. Wearing the prototype, a soldier can haul up to 75 extra pounds with little effort. BLEEX is still a far cry from the superhuman combat gear envisioned by the Defense Advanced Research Projects Agency, which is funding the research. But BLEEX 2, due out in late 2005, should be faster, lighter and more limber.

Power Source
BLEEX runs on gasoline, which is housed in a small one-gallon tank in the backpack. It provides two hours of both hydraulic power for locomotion and electric power for sensors and computer parts. Gas sound dicey? Kazerooni says it’s the only fuel with sufficient power density.

Man In the Suit
“There is no joystick, keyboard or steering wheel,” says Kazerooni. “The pilot becomes part of the exoskeleton.” Just step in and start walking–no training required. Not yet suitable for dodging bullets, BLEEX has a speed of just two steps per second.

Custom Fit
Using human gait analysis, Kazerooni designed the exoskeleton to possess the same mass distribution and range of motion as its human pilot. Now limited to a slow march, BLEEX should be squatting and climbing stairs within two years.

Body Lan
More than 40 sensors are spaced throughout BLEEX’s robotic legs to gauge the direction in which the legs are being pushed. Data is gathered by a nearby computer module and relayed through a “body LAN” to a central processing center in the backpack. A control algorithm then calculates how the pilot is moving, and commands the leg actuators to follow in stride.