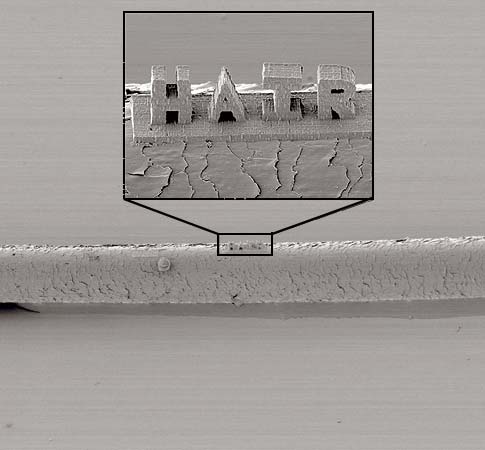 John Fourkas used an ultrafast infrared laser to etch tiny letters onto the surface of a single strand of hair.

Yes, that’s the word–“Hair”–written delightfully, absurdly, on a human hair. This whimsical 3-D microsculpture comes from the head of John Fourkas, a chemist at Boston College. The letters look as imposing as the “Hollywood” sign under an electron microscope, but they’re only 10 microns tall–about 1/10 the width of the hair. Fourkas carefully sculpted each letter from thousands of tiny baked “bricks” of Plexiglas, some as small as 120 nanometers in width.

To make his sculpture, Fourkas bathed the hair in a liquid Plexiglas resin, then hardened the resin with infrared laser light, “cooking it–sort of like you cook an egg white and it hardens,” says Fourkas. By moving the laser around point by point, he can build any shape he likes. When he’s done, he washes away the remaining liquid.

Fourkas envisions making molds with his technique so that one could stamp out thousands of such tiny structures at a time. But more than just an artsy parlor trick, this technology has the potential to yield supersmall 3-D electronic devices, such as inductor coils for cellphones. In a few years, Fourkas would like to etch a car’s VIN number into every chip of its paint, or perhaps tag explosive chemicals with serial numbers. “I don’t think what we did on the hair was particularly useful, but it shows that you can build 3-D microstructures on fragile materials without destroying them.”