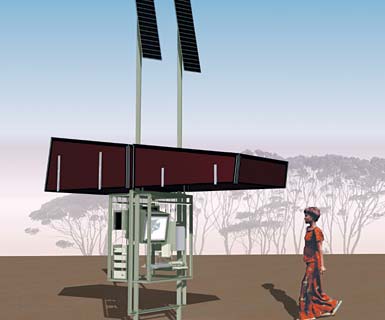 Nothing better represents the technology divide than the silicon junkyards in developing countries such as China where wealthy nations send their still-functional but outmoded computers, cellphones and other discards. People who live in these areas might find such equipment useful, if it could be combined and reconstituted in helpful ways; instead it moulders, dead and disconnected, leaking toxins such as lead, mercury and cadmium. Zago Architecture devised a deployable communications center to connect remote communities with the rest of the world. These centers would be built from salvaged computer and electronics components and would include a computer, a satellite modem, solar panels and a satellite telephone. Such a center would enable far-flung families to communicate, students to supplement their studies, and heath-care workers to access up-to-date medical information.