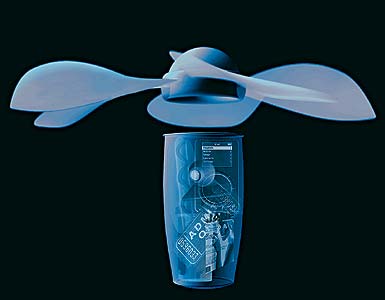 Creators: Springtime-USA
Community: People about to be liberated by the U.s.A.
Project: 21st-century propaganda deployment

The horrendous situation in Iraq highlights the thorny challenge of liberation by a superpower: The liberated don’t necessarily buy into the program. Designer Tucker Viemeister and his team responded with a savagely satirical take: deployment of “very smart bombs” that would rain down token instruments of cultural assimilation. In this concept, autonomous surveillance systems watch foreign news broadcasts for any foment of anti-American sentiment to identify areas in need of intervention. The geographical coordinates are beamed to airplanes carrying the smart bombs; the bombs explode and shower, not explosives, but small, flower-like packages containing assorted bits of Americana. Each package includes a propeller that folds up into a “PAL of the USA” baseball cap.