From the world's oldest mouse 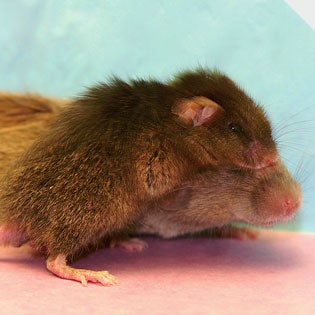 Yoda, the world’s oldest mouse, cuddles with his faithful companion, Leia, the buxom blonde who kept him warm.

I’m lying in my cage half amused, half depressed, mulling over my new title as world’s oldest mouse. I turned four this April. In your world, that means about 136. That’s right: ancient. Even my doctor, Richard Miller, a pathologist here at the University of Michigan Geriatrics Center, is amazed at my longevity. Naturally, the PR folks want to capitalize on my death-defying
existence, so they have nicknamed
me Yoda. Certainly catchier than my given lab name, D053, but look or speak like Yoda I do not.

You probably want to know the secret. Do I hydrate frequently? Sleep a lot? Actually, the trick is my clinically short stature. I was born with a naturally occurring gene mutation that prevents my body from producing normal amounts of growth hormone, a chemical pumped out of the pituitary gland in the brain. At 0.4 ounces, I’m less than half the weight of a normal mouse. I’m also sterile. The upside to my hormone deficiency is extreme life extension. Except for the sterility and Napoleonic physique, Doc Miller says I have a near perfect bill of health. Together we have shown conclusively–in mice–that too much growth hormone early on in life speeds up aging and too little can slow it down.

Despite our work, thousands of middle-aged humans are lining up for weekly injections of synthetic growth hormone in the hopes that the chemical will restore their lean muscle mass, sex drive, energy and countless other vitals that wane with age and flagging growth-hormone production. Sex? Muscles? A little more stamina? Don’t think I wasn’t tempted to juice up too. But Doc Miller talked me out of it. “There is no evidence that GH administration has benefits that outweigh the risks,” he says, “and although more research is still needed, this mode of therapy is at present unjustified and potentially dangerous.” OK, I said, I get the picture.

I’d like to say I’ve suffered for science, but that wouldn’t be entirely true. Thanks to my hormone deficiency, which makes it hard for me to stay warm, I enjoy the very close company of a full-figured young female mouse, Princess Leia, whose sole job is to maintain my body heat (see snapshot). I like to say I’m the Woody Allen of rodents: undersized but never without a lovely lady close by. As for Leia, she’s quiet and sweet and doesn’t seem to mind that I use her as a living fur coat. Because my thyroid is kicked and my metabolism is slow (all courtesy of the gene defect) I’m also naturally lazy; I rarely do anything except cuddle. The sad part is that I’ve outlived my nonmutant loved ones, including two of Leia’s predecessors, who typically expire around age two.
These losses have been tough, but I do take comfort in the fact that I’m helping science unravel the mysterious connection between growth hormone and aging. It’s still astounding to me to think that a single genetic mishap can inadvertently extend the lifespan in mice by an average of 40 percent, and in my case, much more. Imagine what it could do for humans. As Doc Miller likes to say, “Curing one disease at a time is a noble goal, but it’s significantly less attractive than learning enough about aging to indefinitely postpone all diseases.”

—As told to Nicole Dyer

Editor’s note: Yoda passed away just days after this interview. Probable cause of death: old, old, old age. He is survived by his cage companion, Princess Leia.