The killer asteroid that wasn't 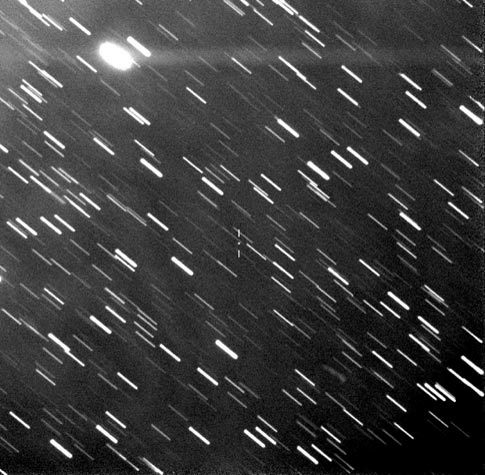 For several tense hours this past January, a group of NASA and amateur astronomers frantically searched for asteroid 2004AS1.

Every day, Harvard University’s Minor Planet Center (MPC) posts a list of newly identified asteroids and comets on its Web site. NASA telescopes spot the space rocks as part of the agency’s asteroid survey, but with only a few initial sightings, the range of possible paths for each new asteroid is huge. That’s why MPC astronomers post the data on the Web: They enlist amateurs across the world to search for the asteroids, and the additional sightings allow them to refine each object’s orbital path. One night earlier this year, one of these skygazers noticed something that concerned him: Object AL00667 seemed to be headed for Earth, and it was coming in fast. Here’s the timeline of that near emergency.

17:50: The data, as usual, is scant: four coordinates per object, for five objects total, generated from 70 minutes of observation. Less information means
a greater number of possible orbits. Spahr posts the whole range on MPC’s Web site and heads out to dinner.

17:59: Reiner Stoss, an amateur astronomer in Germany, informs Yahoo’s Minor Planet List message board that a near-Earth object–an asteroid or comet orbiting in Earth’s neighborhood–named AL00667 “is predicted to become brighter by over 4 magnitudes in just 24 hours . . . and the speed is increasing.” In other words, it’s getting closer, fast. Due to poor visibility, Stoss is unable to search for it.

18:48: Another list member, former NASA Jet Propulsion Lab astronomer Alan Harris, responds, “I can calculate on a desk calculator that this is an impact trajectory.”
19:08: Harris alerts three prominent asteroid researchers: Steve Chesley, a senior scientist at JPL, Clark Chapman of the Southwest Research Institute in Boulder, Colorado, and, most important, Don Yeomans, the director of NASA’s NEO program office. Harris notifies them of the possibility that AL00667 could strike within days.

20:30: An agitated Chesley calls the MPC looking for Tim Spahr. MPC
director Brian Marsden, working late, answers the phone and asks if he can help while Spahr is in transit. Chesley relays Harris’s findings.

20:55: Marsden isn’t worried, as the uncertainty regarding the orbits is so great, but he agrees to help. He supplies Chesley with MPC’s raw Data.

21:01: Although the weather is clear, Birtwhistle responds that his equipment’s setup precludes him from seeing far enough north to spot the
asteroid.

2:19: Still concerned, Steve Chesley informs Chapman, Yeomans and Harris that of 819 orbits he calculated, as many as 40 percent predict impact. He also notes that the asteroid appears to be 30 meters wide–small enough so that it would explode high in the atmosphere, but, according to some studies, large enough to cause damage on the ground.

4:30: Chesley and company receive an e-mail from Colorado-based amateur Brian Warner, who, despite an exhaustive search, can’t find AL00667.

15:20: After analyzing a new crop of data, MPC astronomers find that the asteroid, now catalogued as 2004AS1, was 20 million miles away from Earth–far off the impact trajectories. The threat is officially defused.

To prevent such panics in the future, Marsden and MPC programmer Garreth Wilson adjusted their software so that it will alert the astronomer who is posting new asteroid data when one of the potential orbits outlines a collision course. But the real benefit of the events may have been the test of NASA’s amateur astronomy network. Following the initial panic, MPC handled the situation correctly by actively seeking additional sightings from the amateurs.

There’s no official protocol yet for what to do if they had confirmed that the asteroid was headed for Earth–just a telephone chain extending from MPC to Yeomans and NASA NEO chief Lindley Johnson, and eventually on up to administrator Sean O’Keefe and, if necessary, the president. But let’s hope that if the amateurs do spot an incoming asteroid, those phones start ringing quickly.