A Reader Inquires: I read something recently about physicists who study corporate boards. How is this science? 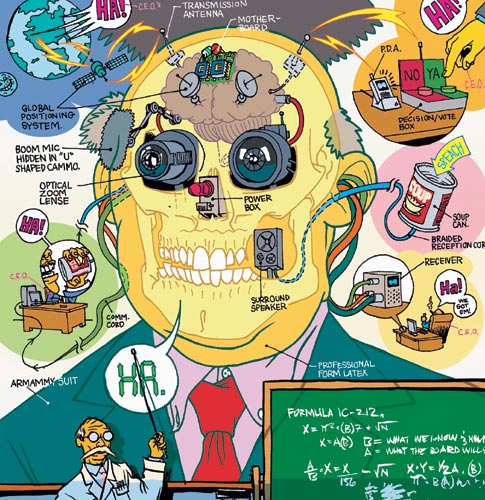 It’s in the method: Inspired by the recent rash of corporate scandals, scientists Stefano Battiston and Grard Weisbuch of the Ecole Normale Suprieure, in Paris, applied an 80 year-old pillar of statistical physics called the Ising model to big business.

The Ising model was developed to explain the orientation of particles within ferromagnetic materials like iron. When you magnetize iron by
introducing an external field, the individual particles all line up. Even after that external field is removed, the particles stay aligned, held there by the cumulative force of their neighbors.

Battiston’s application of the model is, well, a little different. He works in complex networks theory, which is the study of interacting systems–from flocks of birds in flight to computers wired through the Internet. To examine the corporate network, Battiston graphed the directors of the Fortune 1000 companies. He started by representing each board member with a point. In a simple world, the graph would look like 1,000 separate islands, each a cluster of points representing the directors who sit on that company’s board. But in reality, directors often hold multiple seats. So, when two individuals sit on more than one board together, Battiston draws a line between them. Those directors create, in networkspeak, an interlock graph.

Now we get back to the magnets.

Ideally, Battiston says, when a board convenes, all the individuals are unbiased. That’s your piece of iron. But if A and B sit on another board together, they’re more likely to share some opinions, and to try to sway the rest of the board to their side. “From the point of view of the group,” Battiston says, “this is like a small external field acting on the board as a whole.”

The Ising model applies here because it is mathematically equivalent to a model that sociologists use to describe herd behavior, a well-documented phenomenon in which the undecided try to align themselves with the majority. In other words, people follow the consensus the same way particles follow their neighbors. Battiston’s group has even devised a way to measure the force of the aforementioned field. They calculate the force of a lobby based on the topology, or shape, of the interlock graph. So, if A sits with B on an outside board, their interlock graph is a simple straight line. But if B also sits with C on a third company’s board, and C with A, their interlock graph forms a triangle, which generates a stronger field. Granted, a powerful lobby might not be a bad thing. A company run by executives with profligate spending habits could benefit from a frugal lobby. But the reverse is also true:
A lobby of free-spending bigwigs might sway their peers.

Battiston says that some European companies have expressed interest
in his work, but the model has never been tested on an actual board of
directors. Perhaps they’d be too frightened of discovering that it actually works.