Of All the Dumb, Stupid, Boneheaded Blunders!

No need to call Grissom for these Keystone Krooks crimes. Not that CSI investigators don't make boo-boos of their own ... 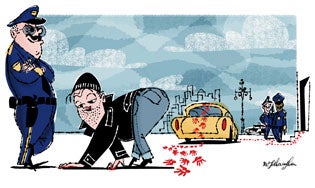 Forensic investigation grows ever more scientific, but when crime-scene veterans swap stories over coffee, the Can you top this? banter often turns not to the minutiae of evidence recovery but to the simpleton blunders of criminals who probably consider Dumb and Dumber a difficult but inspirational film.

Confronting idiots, investigators find that the crudest pantomime of investigatory technique can crack a case. In Horn Lake, Mississippi, for example, police brought a suspected motorcycle thief in for questioning. Earlier that evening, a patrol unit responding to the theft report got close enough to recognize the rider on the cycle (a well-known local troublemaker) before breaking off the chase. Later they spotted the man driving his own car, pulled him over, and found a motorcycle exhaust pipe on the backseat–still warm. The driver claimed that the tailpipe came from a friend’s cycle that he was repairing and denied being on any motorcycle that day.

At headquarters, Lieutenant Lynn Brown asked the suspect whether he watched CSI, whether he’d ever seen them use those special blue lights that reveal invisible evidence. Brown brandished a tiny laser light he’d taken off a key chain, and a pair of safety glasses used on the police firing range. He explained that if, in fact, the man had been riding a motorcycle that day, the light and glasses would enable Brown to see the impression the grips left on his hands, right down to the imprint of the motorcycle’s brand name. Brown shined the toy laser on the suspect’s hands, then turned to a colleague and said, “Well, the only decision now is what we’re going to charge him with.”

At which point, says Brown, the tough guy “immediately grabbed my arm, said, ‘Can’t we talk about this?’ and confessed to everything.” (Federal law allows police interrogators to bluff in this manner–so long as their deceptions don’t involve false promises.)

Following a recent gang killing, Houston crime-scene investigator Christopher Duncan dusted the outside of a vehicle in which the victim had been sitting. Dusting is routine, of course, though Duncan says that “with all the forensics on TV, I’m always amazed when they’re dumb enough to leave fingerprints.” What he found in this case was a personal record: 55 sets of finger or palm prints from the
car exterior.

“The shooter must have been trying to terrorize the guy. Before he pulled out his gun, he beat on this car, open- handed, all the way around.” Apparently it did not occur to the killer that this sort of handiwork might be better done with gloves. The result was a magnificent example of evidence overkill–the first set of prints alone was sufficient to match the gangbanger to a set in the national Automated Fingerprint Identification System database.

When Detective Timothy Carnahan of the Boone County, Kentucky, Sheriff’s Department reran the surveillance tape from a recent gas-station robbery, he noticed the thief throwing something in the trash on his way out of the crime scene. In the garbage can Carnahan found a crumpled job application. The clerk confirmed that the man had asked for an application and dawdled over it while waiting for several customers to clear out. The address on the application was genuine, but Carnahan couldn’t believe the robber had supplied his own home address. “So instead of going directly to the house to see if the guy is there, we burn his picture off the surveillance tape and take it to one of the previous employers listed on the back of the application.” The employer not only recognized the man but also confirmed that all the pertinent information on his application was correct.

Crime-scene investigator Jeff McCarter worked without the advantage of surveillance tape at a recent church break-in scene in Sevier County, Tennessee, but found that the criminal had kindly supplied images of his own.
As McCarter moved from room to room, he noticed a Polaroid camera and photo on a Sunday school table. The picture–an arm’s-length self-portrait–didn’t look like that of your typical Sunday school teacher. “Right about then,” recalls McCarter, “I get a call from a patrolman outside saying he’s stopped someone walking down the road.” McCarter went to look at the apprehended man. “Sure enough, it’s the guy in the picture.” Confronted, the mug admitted to the break-in.

Crimes can be stupid, stories even stupider. Knox County, Tennessee, fire investigator Mike Dalton responded to a reported carjacking and arson in which three men claimed that a fourth flagged them down, ordered them out of their car, drove the car to a nearby parking lot–and then jumped out and set the vehicle on fire before fleeing.

“Didn’t make much sense to me,” says Dalton, with typical cop understatement. Why go to the trouble of a carjacking, then burn the vehicle in sight of multiple victims who presumably can run as fast as you can?

As with the moron who left the complete encyclopedia of fingerprints, these clowns forgot to consider that cars might leave the equivalent–tire prints–especially when on fire. Dalton noticed curious burn patterns on the asphalt in the vicinity of the charred vehicle. He wondered what they would look like from above, and asked the sheriff’s aviation unit for aerial shots.

“In the photos you can clearly see these curlicue burn marks in the parking lot,” says Dalton, evidence hardly characteristic of a stationary vehicle
set alight. Confronted with the photo, the three stooges confessed to the
following tale of utter bumbling:

The previous night, they were driving to a local nightclub when they ran out of gas. The car’s gas gauge hadn’t worked in a long time, and the driver carried a gas can in the trunk. He coasted to a stop in the parking lot and moved to fill the tank, complaining that it was too dark to see. A helpful buddy flicked a cigarette lighter, igniting the gasoline jug, which the driver dropped before jumping into the car to drive it away from the flames. The parking lot was on an incline, and the car made it a few feet upward before stalling, rolling back onto the burning jug, jamming the jug beneath a rear wheel, then spiraling (hence the curlicues) before crashing into a church wall and knocking it down. Charges of reckless burning, destruction of private property, and making a false police report resulted.

Ignorance is an equal opportunity deployer, of course. Forensic entomologist Neal Haskell recalls a homicide in which he asked a coroner whether he’d found any insects during autopsy. “He tells me, ‘No, just some worms I washed down the drain.'” The worms could have been the crucial fly maggots that forensic entomologists such as Haskell use to estimate time of death.

Forensic botanists Jane Bock and David Norris, of the University of Colorado at Boulder, recently asked police to collect plant evidence from the home of a Colorado man suspected of murdering his wife and dumping her body in a mountain canyon. Bock and Norris hoped for leaves, stems and other plant material that they could match with the high-altitude vegetation in the canyon. In their zeal, the CSIs used an industrial-strength vacuum designed to suck trace evidence such as cocaine out of a carpet. This was like taking a leaf blower to a sand castle. There wasn’t a fragment even remotely large enough for a positive match. Luckily, Bock was able
to stop the CSIs before they went at the suspect’s car. There they found enough plant evidence to make a positive match and help prosecutors get the conviction.