At the "brain spa" of the future, transcranial magnetic stimulation and memory-enhancing drugs will clear your mind of forgetfulness and flabby thinking. 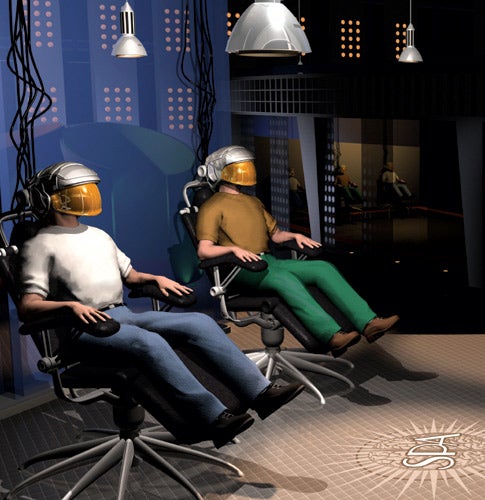 The transcranial magnetic stimulation (TMS) helmet (1) is equipped with movable magnets (2). Microsecond energy pulses induce electrical activity in neurons within the pulses’ magnetic fields. Experts envision cognitive-training clinics where a person’s neural circuitry will first be evaluated. A mental trainer would then prescribe a regimen of brain exercises in combination with drugs designed to “reorganize the brain’s circuitry into a better functional state,” says Tim Tully, a professor at Cold Spring Harbor Laboratory.

A visit to the spa, circa 2015: Your session begins with a battery of mental tests–from visual puzzles to memory quizzes to games that measure reaction time. After your results are evaluated, you don a lightweight helmet housing electromagnetic coils and relax while a certified “neurotrainer” consults a 3-D image of your brain to adjust the helmet settings. You feel oddly energized as the device zaps your gray matter with painless energy pulses. After a few minutes, you visit the smart bar for a custom regimen of brain-enhancing pills.

This scenario is not as far-fetched as it seems. In work sponsored by the Defense Advanced Research Projects Agency (DARPA), neuroscientist Mark George and colleagues at the Medical University of South Carolina have designed a lightweight electromagnetic coil that could someday be mounted inside a pilot’s helmet to clear the tired aviator’s head. This transcranial magnetic stimulation (TMS) machine delivers microsecond pulses of energy a few centimeters into its wearer’s brain, inducing electrical activity in brain cells. Studies have shown that triggering a magnetic pulse right before a person has to hit a button in response to a sound can improve reaction times by 5 to 10 percent, “as if you’ve primed that part of the brain to act,” George says.

When combined with functional magnetic resonance imaging (fMRI), which provides a 3-D picture of the brain’s activity, TMS can target a specific region of neurons. George’s team has shown that a weekly rhythmic stimulation (called rTMS) of the prefrontal cortex, a part of the brain that appears abnormal in many depressed patients, can alleviate their symptoms. (A study is in progress that may lead to the approval of rTMS for depression.) TMS researchers also hope to develop techniques for penetrating the brain’s core, which could lead to treatments for disorders like Parkinson’s. George is even willing to entertain the possibility that such methods could someday stimulate the brain’s pleasure centers. (Mr. Allen, your Orgasmatron is on its way.)

Meanwhile, Helicon Therapeutics and other labs are developing compounds that increase cognitive performance and memory–the smart-bar portion of the brain spa. One target of these new drugs is the cAMP response element-binding (CREB) protein, a molecule that helps form long-term memories. Helicon’s drug is based on research that co-founders Tim Tully, a professor at Cold Spring Harbor Laboratory, and Jerry Yin, now at the University of Wisconsin, conducted in 1995. By genetically modifying fruit flies to up the amount of CREB in their brains, the scientists produced insects with the equivalent of photographic memories. (It took normal flies 10 “training sessions” to learn to avoid a chamber, identified by scent, where they had been lightly shocked. The genetically engineered flies remembered after just one session.) “We’ve shown in animal models that Helicon’s drug reduces the amount of practice needed to commit something to long-term memory,” Tully says. Human studies are to begin this summer.

If the brain spa ever debuts, its first clients will likely be people with brain disorders caused by aging or disease. It’ll be a decade or more before such treatments are available for healthy people, Tully says, because the potential dangers inherent in manipulating the brain go beyond traditional side effects. For example, “maybe you could fill the hard drive,” Tully says, “and after a number of years not be able to put anything more in your brain.”