Equipped with "inchworm" motors and sonar, and built with MEMS processes, tiny inspecto-bots will scurry and fly, performing investigations for their human controllers. 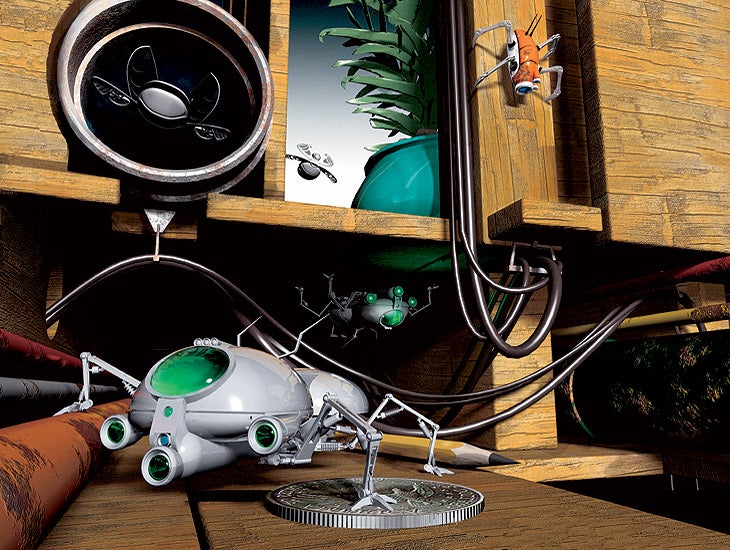 by Kevin Brown and Christopher Wren

_The flier’s ducted-fan-laden wings tilt to hover, steer, and even fly backward. The bottoms of the crawler’s “toes” are covered in minuscule fibers, allowing them to climb smooth surfaces much the way a gecko does. Video cameras mounted on the spider bot’s head check electrical or fiber-optic wiring for frayed insulation, or structural beams for termite damage._

Bugs can go places that humans can’t; they cooperate better than almost any other organism; some of them can even fly. It’s those desirable traits that are driving robotics toward a future that looks more like A Bug’s Life than The Jetsons.

Within a decade or so, swarms of mechatronic bugs outfitted with sensors and wireless transceivers will likely be burrowing through the rubble of buildings to search for earthquake survivors and scrabbling over the hull of a spacecraft to repair damage inflight. They’ll also be the home inspector’s trustiest tool. Imagine the bots scurrying into a house’s plumbing looking for leaks, boring into the insulation in search of asbestos, or checking out that sketchy crawl space.

Professor Kristofer Pister of UC Berkeley’s Center for Information Technology Research in the Interest of Society (CITRIS) and graduate student Sarah Bergbreiter are making progress in that direction. The researchers recently fabricated a solar-powered microrobot just 0.33 inches long and less than 0.16 inches wide.

Key to his microrobot’s locomotion will be novel “inchworm” motors that work by repeatedly engaging and releasing a shuttle that pulls a leg forward a minuscule amount. Right now, his bot has just two limbs, which aren’t quite strong enough to drag along its body. Still, the bug demonstrates that tiny autonomous robots can be fabricated with MEMS (micro-electromechanical systems) processes, similar to the way integrated circuits are manufactured.

More advanced but bulkier are the matchbox-size millibots built by engineering professor Pradeep Khosla of Carnegie Mellon University and his grad students Robert Grabowski and Luis Navarro-Serment. Their latest battery-powered millibots were constructed using off-the-shelf components and employ a combination of ultrasonic sensing and sonar to navigate uncharted territory.

Meanwhile, researchers at UC Berkeley, Seiko Epson Corporation and other laboratories hope to unleash flocks of winged microrobots. Most recently, Seiko Epson applied the design lessons learned from its Monsieur microrobot to a helicopter-like robot levitated by contra-rotating propellers. The one-third-ounce, 5-inch-diameter FR (Micro Flying Robot) sports a tiny ultrasonic motor for propulsion and a linear actuator for stabilization. A low-power Bluetooth module will enable wireless control at distances up to 30 feet.

When a robotic fly designed by CITRIS researcher Ronald Fearing takes off, it will draw power from a 30mW lithium-ion battery on its rear. The robot is smaller than a quarter and weighs in at just 0.0035 of an ounce. A wee piezoelectric motor causes its single wing to simultaneously flap and rotate 150 times per second. The goal, Fearing says, is to outfit the fly with a tiny video camera and Smart Dust sensors for search-and-rescue and reconnaissance missions.

Whether the next generation of robots scurry along the ground or take to the air, they’ll be essentially simple creatures. “The more capability you integrate into a single system,” Khosla says, “the higher the probability of failure.”