Fanciful writing on our part aside, the rapid climate change scenario isn't so far-fetched. 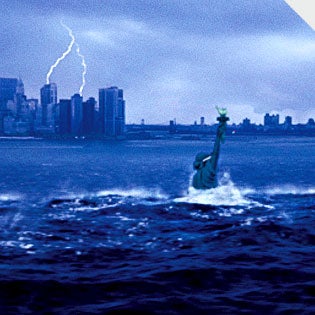 SCENE 1 // TROUBLE APPROACHES
For this shot sequence, the visual effects supervisor used a helicopter to take photos above New York Harbor. They pasted these images to the interior of a digital sphere, creating a 3-D backdrop for 360-degree camera pans. After adding stormy skies and a digital Liberty, they went to work on the water. Artists started with a foundation of featureless water, then added layers for chop, whitecaps, foam, sea spray, etc.–about 30 in all.

We admit that our critical examination of rapid-climate change disaster flick The Day After Tomorrow contained a fair measure of glittery Hollywood flair. But it doesn’t take a paleoclimatologist to realize that abrupt climate change can’t really happen in a week, and our writer Matthew Teague didn’t actually climb a mountain of skulls in Africa to find that out. Even though we indulged in a measure of dramatic exaggeration, the original source material shocks the reader with plausible conjecture. Peruse the cruel truth in the Pentagon report–authored by the Oracle of the Future (a.k.a. futurist Peter Schwartz)–which outlines the global impact, such as sudden food and water shortages, that rapid climate change could provoke.