Palm and the World Islands 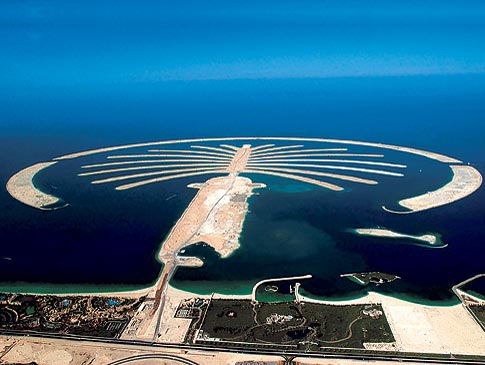 The first Palm Island under construction and nearing completion.

What: The largest man-made offshore islands

Crux: Two islands built in the shape of giant palm trees. The “trunks” are 5 miles long, each topped by 17 “fronds” up to 330 feet long. A third island group is shaped like a flat map of the globe. Materials: 4.2 billion cubic feet of dredged sand and 50 million tons of rock.

In 1975 there wasn’t a single high-rise in the sleepy fishing village of Dubai. But, flush with oil riches and grand ambitions, the business capital of the United Arab Emirates is now sparing no expense to reinvent itself as a Middle Eastern Oz. Exhibit A: Two islands being built 3 miles offshore in the outline of giant recumbent palm trees. Each 5-mile-long trunk sprouts 17 fronds up to 330 feet long, on which a mind-boggling collection of villas, hotels, marinas and shopping complexes will be built. Everything is to be connected by high-speed monorail.

The first island was completed in late ’03 after two years of work. Engineers mapped the island’s shape via GPS surveys accurate to 2 centimeters. Seven dredgers, 20 miles out to sea, each filled a 5,200-to-22,000-cubic-yard hopper every hour. The hoppers in turn deposited more than 2 billion cubic feet of sand in the appointed areas. “We had to start before there was any protection from the breakwater,” says Mark Lindo, engineering manager for the Dutch marine contracting firm Van Oord ACZ, “so we built it 13 feet below sea level.” When 9 million tons of rock in 5-ton chunks finally sheltered the palm, Lindo raised it to its final height of 13 feet above sea level.

Even as Lindo begins Palm Island No. 2, he’s about to start an even bigger project, an archipelago of 250 islands, called the World, laid out to mimic Earth’s land masses. It will be 5 miles across and require 200 million cubic feet of sand, and 30 million tons of rock. “It’s enormous,” says Lindo. “In Europe or America it would take 10 years of planning and studies to do something like this. But in Dubai it’s the other way around. We just do it as we go.”