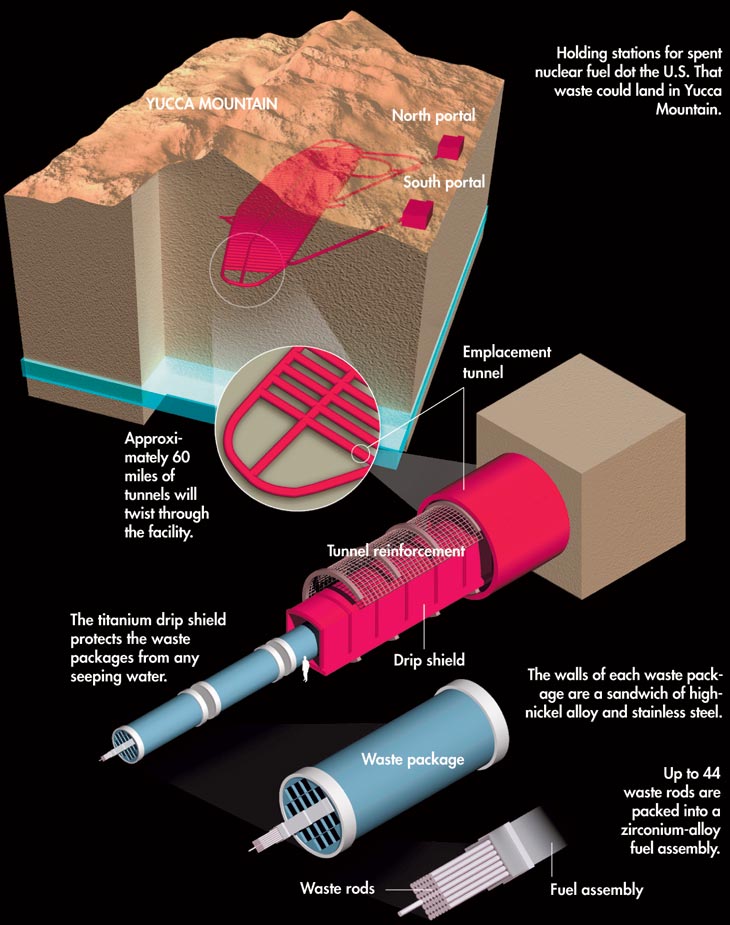 Entombed 1,000 feet beneath Yucca Mountain, spent nuclear fuel will, it is hoped, remain undisturbed. Engineers plan to place nuclear waste inside boron-carbide rods. The rods will be packed into a series of secure containers to minimize the possibility of leakage. The first is a zirconium-alloy box called a fuel assembly. Fuel assemblies will be placed in a stainless-steel-and-nickel-alloy cylinder called a waste package; waste packages will be stowed in tunnels lined with titanium shields and reinforced with steel ribs and mesh.

What: A 10,000-year storage facility for radioactive nuclear waste

It’s an engineering challenge that dwarfs all others: disposing of 70,000 metric tons of highly radioactive nuclear waste for 10 millennia. Already, some 43,000 metric tons of this dangerous waste are in temporary storage, and America’s 103 operating nuclear powerplants are generating another 3,000 metric tons a year. And the 10,000-year figure, daunting as it sounds, is conservative; the half-life of plutonium is 24,000 years, which means it’ll actually take 240,000 years before you can hold a chunk in your hand without being poisoned by radiation.
More than two decades ago, U.S. scientists found what seemed the perfect place for the stuff: Yucca Mountain, a dry, remote and geologically stable desertscape 100 miles northwest of Las Vegas, conveniently owned by the federal government. But in the ensuing years, scientists and engineers have dug and prodded and modeled every piece of the mountain’s geology and hydrology, spending some $5 billion, and the puzzle only grows more complex (and political opposition more heated). One important discovery: There could be more water than originally thought in the mountain, which could corrode the waste containers and allow waste to reach the water table. That makes engineered barriers almost as important as the natural mountain bulwark itself.
If the Nuclear Regulatory Commission licenses Yucca Mountain in 2009, the first stage of a 300-year project will commence in 2010: the boring of 60 miles of access and emplacement tunnels 250 feet apart and up to 25 feet in diameter, 1,000 feet underground. When waste arrives by truck or train, it will be placed in 19-foot-long, 7-foot-wide stainless-steel casks, then coated with a corrosion-resistant high-nickel alloy called C22. But even thus encoffined, the 80-ton “waste packages” will be highly radioactive and around 180