A Contrarian View of Cancer

Once shunned for his AIDS theories, Peter Duesberg is back in the spotlight. 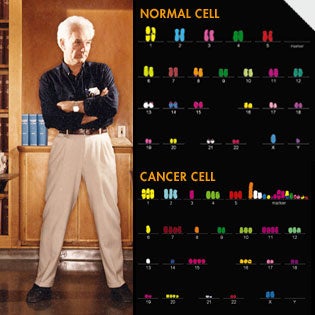 THE UNUSUAL SUSPECTS
A healthy human cell contains 23 evenly matched pairs of chromosomes, which can be seen here, tagged with different fluorescent dyes and neatly organized according to size, from largest to smallest. For reasons that still elude scientists, when a cell turns cancerous, its chromosomes almost always appear mangled, multiplied or both. Color-coded lineups like these help researchers easily track the misfits, which are labeled as “markers” and set apart in the upper right-hand corner. Berkeley-tenured scientist Peter Duesberg, who at 33 co-discovered the first oncogene, believes structural defects in chromosomes may be driving the gene mutations that cause cancer.

You might think Peter Duesberg would have learned his lesson. In 1987 the University of California virologist declared that recreational and other drugs, not the HIV virus, cause AIDS. He even offered to inject himself with the virus to prove it. The radical theory “didn?t help my career,” Duesberg acknowledges today. Grants dried up. Graduate students steered clear of his lab.

But none of this has stopped Duesberg from challenging mainstream theories. Now he?s taking aim at one of cancer research?s most dearly held hypotheses: that deadly tumors arise when a handful of genes go bad.

In January, Duesberg organized a scientific conference in Berkeley to debate an alternative theory. It?s not faulty genes that cause cancer, he argues, but faulty chromosomes. If he?s right, his ideas could fundamentally change how doctors screen for cancer, and could lead to earlier tumor detection.

A normal human cell contains 46 chromosomes. Most tumor cells contain double or triple that; in some, chromosomes are also missing or mangled. The condition, called aneuploidy, was first linked to cancer in 1914 but the connection was eventually pushed aside when scientists (Duesberg among them) discovered oncogenes– genes that spur tumor growth. If a few oncogenes mutate, the theory goes, uncontrolled cell division,
or cancer, will follow. But, Duesberg argues, the disease doesn’t always follow. Scientists have genetically engineered rodents teeming with oncogenes and yet these animals, he notes, rarely become tumorous. “If the mutation theory was right,” he says, “those mice should be meatballs.” Moreover, cells within the same tumor don’t always manifest the same mutated genes.

To explain these apparent gaps in cancer’s central dogma, Duesberg has put forth this theory: A carcinogen–say, tobacco smoke–causes a cell to produce daughter cells with malformed chromosomes. Since a single chromosome can host thousands of genes, the reshuffling that occurs during replication creates widespread chemical mayhem. Years or decades later, the process yields a cell with a deadly combination of mutant genes.

While Duesberg’s concept of cancer is far less radical than his AIDS theory, which he still believes, many researchers remain skeptical. Aneuploidy, they contend, is little more than a side effect of cancer. Robert Weinberg, a breast cancer researcher at the Whitehead Institute in Massachusetts, says his lab has created tumor cells with a normal set of chromosomes. “He has chosen to ignore that data,” Weinberg says.

But even if Duesberg’s theory proves rubbish, some scientists say he’s helping to stimulate new thinking about cancer’s origins. “Just because he had some weird ideas about AIDS at one point, it doesn’t mean he’s an idiot,” says Johns Hopkins cancer researcher Christoph Lengauer. “He’s helped the discussion.”