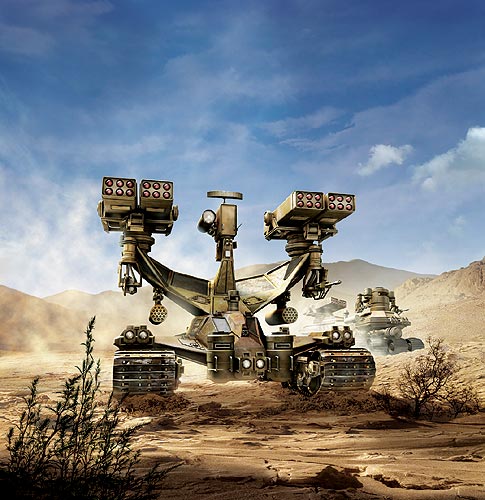 What the Future May Hold

While DARPA’s Grand Challenge will certainly accelerate the evolution of unmanned ground combat vehicles, the U.S. Army and the Marines are already aggressively pursuing the technology and hope to have it combat-ready ASAP–regardless of whether the droids can operate on their own or merely by remote control.

The Army’s Future Combat Systems (FCS) program is intended to create a force that is as powerful as today’s but substantially more nimble. The Army’s goal is for both remote control and autonomous unmanned vehicles to be a major part of ground combat by 2010. “Military robots are being developed and fielded to do three things: perform the dull, the dirty and the dangerous,” says military robotics pioneer Scott D. Myers, president of General Dynamics Robotic Systems in Westminster, Maryland.

Three types of lethal robots are being developed for FCS. United Defense Industries is creating its Armed Robotic Vehicle (ARV), a 5-ton prowler armed with missiles and a medium-caliber gun turret. It will also provide targeting information for other weapons and seed battlefields with miniature sensors.
Lockheed Martin’s candidate is the MULE, or Multifunction Utility/Logistics and Equipment vehicle. Smaller than the ARV, the MULE will follow troops over rough terrain and urban rubble, carrying gear and ammo for infantry squads, carting back wounded soldiers, looking for landmines, or firing antitank weapons or machine guns.

Both of these vehicles are already in the prototype stage and being tested in DARPA’s unmanned ground combat vehicle demonstration program. A third likely system is the Soldier Unmanned Ground Vehicle (SUGV), developed by iRobot, the same company that makes the Roomba robotic vacuum cleaner.

The SUGV will be a remotely operated reconnaissance and tactical robot. Able to climb stairs, the sensor-equipped, pint-size robot will allow soldiers to see around corners during urban street fighting.
It might also be armed with a grenade launcher and equipped with directional microphones and motion detectors for overnight sentry duty, allowing ground-pounders to get some sleep.