AI for your PC

New games Fable and the Sims 2 further the cause of agent-based play. 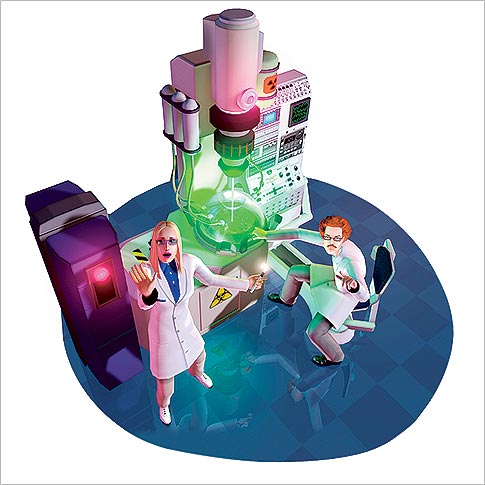 Peek behind the graphics of two new games and you´ll find the same artificial intelligence that´s at work in Pentagon-sponsored war simulations.

In the Sims 2 (due out spring 2004, $50), a player manages the life of a simulated human being who interacts with other computer-generated people and things. The Sims 2 is an evolution of the original (the best-selling computer game ever): Characters display more acute awareness of their surroundings-turning their heads if someone enters a room, or losing their train of thought when distracted. â€It´s like a human pinball machine,â€ says Sims creator Will Wright. â€The characters are the balls. You can roughly predict where each ball is going to spin, but from second to second it depends on how it reflects off a bumper.â€

Each time a Sims character acts, the game´s program engine calculates how his mood is affected. If he´s hungry when he cooks a meal, his overall happiness will rise more than if he´s not. If he has cooked in the past, he´ll bring skills to the action, further increasing his enjoyment. And for a new twist: children. In the original Sims you could canoodle in a hot tub but there was no spawn; now you can make babies. Kids blend their parents´ facial features and personality traits-both of which evolve as the children age.

Fable (coming out later this year) is a classic adventure game: Players wander through villages full of maidens and bandits. But designer Peter Molyneux heightened the fun by coding the game so that unforeseen events unfold in response to a player´s choices. Plant an acorn and a tree grows. Kill a man and his son seeks revenge. The effect, Molyneux says, is â€a world you can experiment with. Characters don´t just stand there, they react.â€