He Teaches You How to Take Sin City for Millions 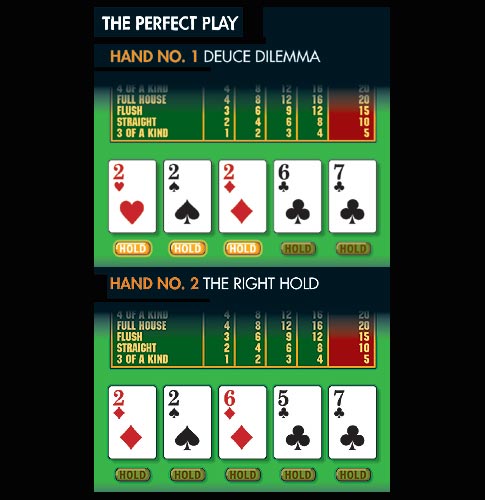 Got a few hundred to blow in Vegas? Good, because even a video poker guru like Dancer loses more often than he wins. But by knowing the game and playing the odds, you might just walk away with a few extra grand in your pocket. Here are two hands commonly flubbed by amateurs in NSU Deuces Wild, and the strategy for playing them perfectly. For strategy, please refer to the bottom of the article.

JOB Professional video poker player and teacher. Dancer originally moved to Las Vegas to become a blackjack ace, but changed his name–Dancer is a pseudonym based on his other life passion–and his game when wary casino owners caught on to his card counting. Switching to video poker turned out to be a lucrative career move–during one six-month stretch in 2001, for example, he netted a cool million. (His greatest loss, $90,000, occurred during the same period.)

WORKPLACE Dancer holds free classes every Tuesday night at either the Fiesta Rancho Casino Hotel, or the Fiesta Henderson Rancho Hotel (see his Web site below for details). Otherwise, his workplace changes nightly depending on the promotions offered by individual casinos. A casino offering double points, for example, might pay him a cash-back bonus of, say, $600 rather than $300 for every $100,000 played. There is one place he never sets foot, though: The MGM Grand. After paying him $500,000 during his million-dollar run, it restricted his Slot Club benefits and removed the offending machine.

CRITICAL TOOL Math. Video poker is a numbers game, and the laws of probability bear out that there’s a single best play for every hand. (See left for more.)

CURRENT PROJECT A series of six Winner’s Guides that spell out strategies for such popular games as Full Paid Deuces and Jacks or Better. “There are 2.6 million different hands in a 52-card deck,” says Dancer. “The guides group them into about 20 categories and give you rules to play each one perfectly.”

GREATEST CHALLENGE New versions of video poker are constantly hitting the scene, and each one requires a different strategy to win. Plus, as successful players increase in number, casinos are lowering pay schedules (the amount they award for, say, a full house or a flush), cutting back on promotions, and reducing the number of machines. “It’s survival of the fittest,” says Dancer.

FINAL WORD “Any individual betting session may be 90 percent luck, but when you play 500,000 hands a year like I do, it’s 90 percent skill.”

Refer to the image above to use the following two techniques”

Hand #1: deuce dilemma
Your instinct: Hold the straight flush you’ve been dealt, which pays out $50 on a $5 bet.

What you should do instead: Hold only the three deuces, which are wild, and draw two new cards.

Why? There are 1,081 different two-card combinations you can draw to the three deuces. In 819 cases (or 76 percent of those draws), this play will only result in a four-of-a-kind, which pays $20-a net loss of $30 from the straight flush you were dealt. But 156 combinations will improve your position. Forty-six of these combinations include a fourth deuce, which would give you a five-of-a-kind and light up the machine for $1,000. The average payoff for a three- deuce hand is slightly more than $72-only wimps settle for the sure-thing $50 straight flush.

Hand No. 2 The right hold
Your instinct: Hold the entire hand (a straight), or hold the wild twos and draw three new cards.

What you should do instead: Hold everything but the six of diamonds.