In this corner: Gregory Stock, director of the program on Medicine, Technology and Society at UCLA. and in this corner: Panos Zavos, professor emeritus of reproductive physiology at the University of Kentucky. 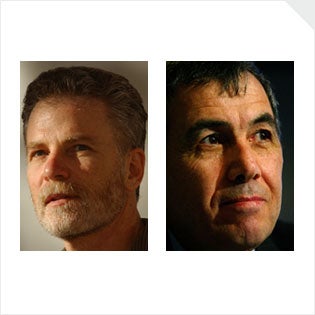 On February 4, Zavos revealed that the cloned embryo he purportedly transferred into a woman’s uterus failed to implant. Stock believes clones aren’t far off, but says Zavos isn’t legit. Here, a discussion just hours before Zavos told the British press there’s no baby.

Stock: The only reason Zavos made a cloning announcement is for publicity, just like the Ralians.

Zavos: That’s an insult. I’ve been involved with reproduction for 25 years. The only thing the Ralians know about reproduction is what they’ve done in the bedroom with the lights off. My team decided that as soon as we transferred a cloned embryo into a woman, we would tell the world — it’s a milestone.

Stock: Zavos may have created an cloned embryo and transferred it into a woman. Anybody can do that. But the embryo won’t be viable. There’s no pregnancy.

Zavos: I am not misleading anyone — I tell my patients the facts: If we assume our embryos are as good as IVF embryos, our success should be 20 to 30 percent.

Stock: That’s completely dishonest. He’s admittedly equating human cloning — an extremely new and so far unsuccessful process — with a well-developed procedure that took decades to perfect. The odds that his transfer will result in pregnancy are more like 1 in 1 million. I’m convinced there will be a human clone within a decade, but it’s trickier than people imagine. Some of our top scientists, people like Jerry Schatten and Tanja Dominko, have created hundreds of cloned primate embryos, but none were even close to being viable.

Zavos: Schatten was given $6.3 million by the NIH to prove that cloning doesn’t work in primates so no one will be able to do it in humans. What Mr. Schatten does, in order to intentionally fail, is damage the cell’s spindle apparatus, which makes sure the right number of chromosomes end up in each new cell during division.

Stock: That’s absurd. Schatten couldn’t care less about cloning a human.The NIH funds primate cloning because, if successful, it could lead to animal models for studying human diseases. The problem isn’t that Schatten damages the spindle, it’s that the necessary spindle components aren’t there. In monkeys and humans, the machinery needed for a properly functioning spindle comes from the sperm (as opposed to sheep, where it comes from both sperm and egg).

Zavos: Our team is aware of that problem, but we’ve solved it.

Stock: Someone will solve the problem, but it won’t be Zavos. It will come from primate researchers.

Zavos: Human cloning will take years of practice. Like playing the lottery, unless you buy a ticket, you never win. So we have bought our ticket! And we insist on winning.

Stock: I’ll bet $10,000 today, if Zavos will, that nine months from now there will be no cloned baby.

Zavos: We play to win, but we also know our odds. We don’t bet on science. Besides, we don’t have any money to bet. If we did, we would invest it more wisely than that.