In the hunt for toxins, spy insects go where humans can't. 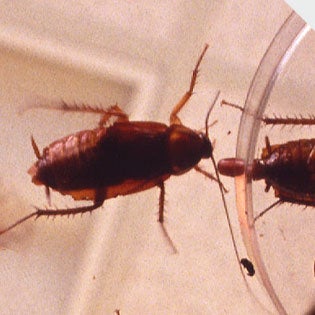 Glue genetically modified yeast cells to the back of this wily roach and it could easily transform into an agile biochemical weapons detector, says brinker.

That, at least, is the vision of Jeff Brinker, a materials scientist at Sandia National Laboratories in Albuquerque. Brinker and his team have devised a way to transform the loathed insects into stealthy environmental sentinels to detect chemical or biological agents.

The idea of roach recon isn’t as bizarre as it may sound. The Defense Department is already exploring how to use everything from bug-size robots to live wasps for similar tasks. Before warming to the roach idea three years ago, Brinker worked on a Pentagon-funded project to harness honeybees as explosive-sniffing scouts.

Roaches were a natural next step. “It’s a very durable beast,” Brinker says. “Plus they tend to explore nooks and crannies.” But how to put their wiliness to work? The key, Brinker says, is genetically altered yeast cells glued to the bug’s body that will glow when they encounter something harmful.

But sensors made of living cells are difficult to keep alive out in the field, says Brinker.

So the Sandia team coated the cells with Sol-Gel, a liquid material Brinker invented composed mostly of silicon dioxide, or beach sand. The coating hardens into a porous shell
only a few nanometers thick. Each pore in the shell stores nutrients to keep the cells perky, and allows the cells to sniff the outside air.

So far the team has created yeast that glows green in the presence of cholera (scientists tagged cholera-sensitive genes with a glowing jellyfish gene). Now they are working on anthrax and hope to eventually add other toxins to the list.

Sandia is not the only lab trying to exploit cell-based sensors. Last year MIT scientists engineered mouse cells to light up in the presence of smallpox and anthrax. And Craig Giroux, a molecular biologist at Wayne State University in Detroit, is rewiring baker’s yeast to tag pollutants and industrial waste.

Although Brinker has yet to actually rig a roach, he says it will be easy enough. The scientists have modified inkjet
printers to spray Sol-Gel-swaddled cells onto silicon, glass or plastic backings. Glue a yeast chip onto the back of a cockroach and it’s Agent Roach reporting for duty.