Urban Firefighting Gets a Killer Edge

A new rapid-fire gun could save lives rather than take them. 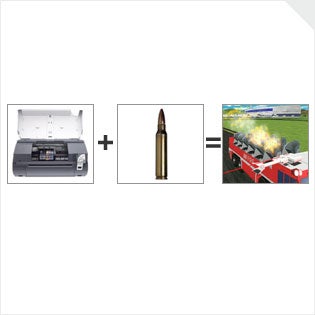 Metal Storm, an Australian-made weapon in development for the U.S. military, is notorious for its terrifying rate of fire: a million rounds per minute. When you press “fire” on the weapon’s laptop computer, sequenced electronic signals are sent to shells preloaded into a grid of 24 projecting barrels, and the mayhem begins. With no clumsy moving parts — ammo feeders, breeches, firing pins — Metal Storm can blast out bullets much like an inkjet printer sprays dots on a page. The gun’s primary purpose is “to kill, stop, destruct, harm the target,” says Arthur Schatz, Metal Storm’s senior vice president of operations. But now the company is working on a peacetime application: to fight high-rise fires. Swap out the ammo for Pyrogen, a novel flame suppressant that is far lighter than other chemical agents, and Metal Storm guns “could be a valuable adjunct to existing firefighting methods,” says Captain Larry Collins, a helicopter operations specialist for the Los Angeles County Fire Department. Firefighters reach a blaze by scaling stairs, averaging a minute per floor, precious time in which the fire above them can spiral out of control. Crews equipped with Metal Storm guns mounted on trucks or on the skids of a helicopter could shoot Pyrogen canisters through the skyscraper’s windows — a hundred into Window A, Floor 34, 50 into Window B, Floor 46, and so on — thus buying time for the crews on foot.