The fallacy of the black hole in Switzerland that would swallow Earth. 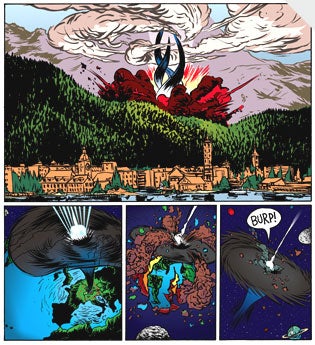 A reader asks: “I heard that a new
particle accelerator might create black holes. Won’t these end up destroying Earth and everything on it?”

The planet is safe. (From particle accelerators, anyway.) While there is a slight chance that the Large Hadron Collider (LHC), a next-generation particle accelerator scheduled for completion in 2007, could produce black holes, they will certainly not be of the planet-swallowing variety. No, these would be about a million times smaller than the nucleus of an atom, and they’d “evaporate” — essentially disappear — in roughly 10-27 seconds. Apologies to the doomsday crowd, but the LHC won’t be powerful enough to produce anything more threatening.

A quasi-controversy of this type first made the rounds through the news media and Internet in 1999, during the construction of Brookhaven National Laboratory’s Relativistic Heavy Ion Collider (RHIC). In response to several alarmist, inaccurate news reports, Brookhaven commissioned four physicists to study the potential risk. The scientists concluded that RHIC posed no danger, but recommended that the question be revisited “each time a new facility opens up a new high energy frontier.”

The upcoming LHC does just this, and so we called MIT physicist Frank Wilczek, one of the authors of the RHIC study, to revisit the question. We asked him if we had anything to worry about with the LHC. He laughed.

In a commendable spirit of thorough inquiry, Wilczek and colleagues’ original study started with two different sets of assumptions. The first holds that our current estimate of gravity’s strength is correct. The second maintains that our understanding of gravity is wrong, that there is “new physics” of a very specific type lurking at the extreme energies the new particle accelerator will create. Only in the second scenario would it be possible to create miniature black holes, either at RHIC (which had not yet, as we went to press, destroyed Earth) or at the LHC. “In standard theories of gravity, you can estimate what it would take to make a black hole, and that’s just not going to happen,” Wilczek says.

To create a black hole, the mass inside a certain volume has to cross a threshold. There needs to be so much mass in so little space that the force of gravity actually rips the fabric of space-time. Even though particle
accelerators are designed to concentrate the maximum amount of mass (or energy) in the smallest space possible, the ones we can build now — including the LHC — are simply too weak to cross this threshold, provided that our current theories of gravity are correct. But if, as some physicists have proposed, gravity is actually stronger at very small distances (owing to the existence of unseen extra dimensions), we don’t need to cram quite as much mass into the same confined space to create a black hole, and the LHC could produce more than 86,000 black holes every day.

Yet once these appeared, they would abruptly evaporate, thanks to an unusual black hole weight-loss program called Hawking radiation. “So, again, they wouldn’t cause any danger,” Wilczek says. “They would look not so different from unstable particles that we’ve been dealing with at accelerators for a long time.”

Now, there are some arguments floating around the Internet that suggest we be more careful, because Hawking radiation, which would keep these mini-black-holes from growing, is unproven. True, but so is the far more hypothetical existence of extra spatial dimensions, which would be needed for particle accelerators to make the black holes in the first place. More important, these arguments seem to miss the point of a new accelerator, which is to explore the unknown. Hawking radiation will remain unproven until we witness a black hole evaporating. And though we may not see it happen at the LHC, wouldn’t it be exciting if
we did?