Saddled with poisoned real estate, one city turns to GM trees to mop up the mess. 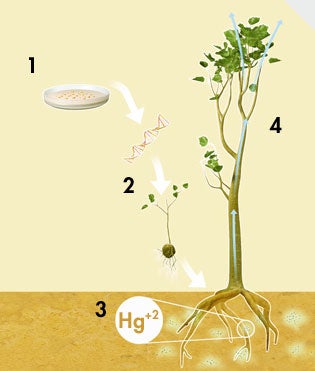 HOW TO MAKE A TRANSGENIC TREE
Trees can absorb mercury from soil, but not enough to sanitize heavily contaminated areas. To give cottonwood trees extra-strength detoxifying power, geneticists turned to a bacterial gene. 1. In a petri dish, Meagher and colleagues inserted a mercury-detoxifying E.coli gene, called merA, into the genome of a common soil bacterium. 2. The new bacterium “infects” a day-old cottonwood, inserting a modified form of the merA gene into the tree’s cells. The resulting transgenic sapling is raised in a greenhouse for three months, or until it’s hardy enough to survive outdoors. 3. The cottonwood is transferred to the test plot in Danbury. The tree’s extensive root system branches out in the soil and begins to absorb and convert ionic mercury (Hg+2) to less-toxic elemental mercury. 4. The transformed mercury moves up through the tree to the leaves, where it’s expired into the atmosphere. UGA scientists say future versions of their trees will retain the mercury in their trunks.

While the world gauges its appetite for genetically modified (GM) food, scientists are quietly planting the next big thing in biotechnology: trees genetically tweaked to suck up chemical waste.

Researchers at the University of Georgia hope their GM cottonwood saplings will draw toxic mercury from the soil, convert it into a less dangerous form, and eventually store it in their trunks. The trees, planted last July in a vacant lot in Danbury, Connecticut, could save the city many thousands of dollars
in cleanup costs and make disposal safer and easier. Instead of digging out layers of polluted dirt and carting it to special chemical landfills, workers will, in 4 to 5 years, simply let the chainsaws rip.

“Excavation, removal and replacement of the toxic soil would cost $543,000,” says Jack Kozuchowski, Danbury’s environmental director. “The cottonwood trees cost us next to nothing.”

Nationwide, an estimated 332 mercury-contaminated sites are on the U.S. Environmental Protection Agency’s Superfund list awaiting cleanup. The Danbury experiment marks the first time that trees have been genetically altered to draw the poison from the ground. “We’re looking for a green solution to the problem,” says Steve Rock, who oversees the project for the EPA.

The process of using plant life to clean up toxic chemicals leached into the soil is called phytoremediation. Some plants, like the arsenic-absorbing break fern, are hyperaccumulators, meaning they have evolved the ability to thrive in toxic environments. Since there are no known natural hyperaccumulators that absorb significant amounts of mercury, Richard B. Meagher and his associates at the University of Georgia turned to genetic engineering. Meagher knew that for centuries mercury has been used as a crude antibiotic, giving bacteria ample opportunity to evolve resistance. “The idea was to take that evolutionary trick and give it to the trees,” Meagher says.

First, he isolated an E. coli
bacteria gene that transforms ionic or methyl mercury (the forms found in tainted soil and water) to less lethal elemental mercury. He then implanted the gene, dubbed merA, into day-old cottonwood trees, which were chosen because they develop extensive root systems quickly. When the trees were mature enough, they were transferred to pots, and then to the Danbury test plot (see diagram).

In the first stage of the experiment, the elemental mercury is expected to pass through the trees’ roots and up their trunks, to be transpired through the leaves into the air. “The amounts that would be released into the air are minuscule. It’s a much greater danger to leave it in the ground, where it can get into the food chain or water supply,” Meagher says. But he’s confident that within the next three years he can engineer a new batch of trees that will keep the mercury in their trunks.

Meanwhile, little is known about transgenic mercury phytoremediation, and Danbury offers plenty of opportunities for field study. In the first half of the 20th century, the Connecticut city was known as the hat-making capital of the world. Scores of factories used a mercury bath to soften animal pelts to make felt. Since mercury toxins attack the central nervous system, longtime employees gradually became demented. So many workers suffered from tremors that the affliction was nicknamed the Danbury shakes.

When a mercury bath was spent, factories usually dumped
it out the back door, and decades later the health threat lingers. Last spring, Kozuchowski identified a suitable test area — the
site of a burned-down former hat factory on Barnum Court in downtown Danbury. Mercury concentration in the one-third-
acre lot, which is covered by a layer of protective soil, ranges from 1 to 315 parts per million, says Kozuchowski. The state’s voluntary limit for mercury safety is 600 ppm for an industrial site and 20 ppm for residential, so Barnum Court actually meets
the looser criterion.

But the city wants to sell the property, “and we want to clean it up to residential standards,” Kozuchowski says. The Danbury demonstration project will provide answers to basic questions: Will the trees drink enough mercury to make it worthwhile? And if so, at what rate? Meagher says he hopes to see a measurable decline in mercury by the end of 2004, though he admits that results could take far longer.

So far, no arborial-rights group like People for the Ethical Treatment of Cottonwood Trees has thrown a monkey wrench into the project, but Jim Diamond, chair of the Sierra Club’s National Genetic Engineering Committee, is skeptical about the benefits.

“The transgenic trees wouldn’t be observed closely enough to do this safely,” Diamond says. “What if the project goes bankrupt? What will happen to the trees then? Ultimately, nobody knows the effects of transgenic trees and pollen on the environment.”

Glass says great pains will be taken to make sure reproduction is nipped in the bud. For one, cottonwoods typically take 5 to 10 years to reach sexual maturity — “our trees will be cut down long before they have a chance to spread pollen,” he says.

If the field trial pans out, Meagher envisions this now-fringe technology being used in the future to clean up all kinds of toxins in the environment. “We’re not doing even one-thousandth
of what we could be doing,” he says. “It’s not that complicated a process, and it promises an awful lot of power to do good.”