Murder of the Bounty: The Seas Empty 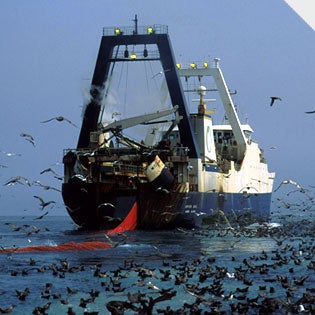 A bottom trawler drags a 200-foot-wide net for hours, snaring everything in its path. Just 16 percent to 72 percent of the catch consists of desired fish; the rest of the captured sea life suffocates and is discarded.

_Industrial-size fishing boats called bottom trawlers drag their 200-foot-wide nets along the ocean floor for hours, grinding up fragile ecosystems and hauling in huge amounts of bycatch. To see the damage, view this animation/video (requires Flash plug-in) from the United Anglers Marine Resource Conservation Program. And for more information, visit the organization’s website at stoptrawling.org
_

The news about the world’s oceans in 2003 wasn’t that they’re in trouble — that much was already clear — but that the scale of devastation is far greater than anyone had realized. A shocking study revealed that a full 90 percent of the species most desirable to fishmongers — tuna, halibut, sharks, swordfish, grouper — has been wiped out in the past half century. But there was hopeful news as well. An alternative to conventional fishing practices, while not a cure-all, could significantly restore ravaged fish populations.

The chilling centerpiece of last year’s marine research: Just 50 years of industrial fishing has decimated the world’s large predator fish species, according to a report published in Nature in May by biologists at Dalhousie University in Halifax, Nova Scotia. Irresponsible fishing practices have inflicted severe casualties: Shrimp trawling in the Gulf of Mexico, for example — a reckless process in which, for every ton of shrimp procured, three tons of finfish are destroyed and discarded — has shrunk large fish stocks
a thousandfold. “Across the board we’ve removed everything bigger than a bicycle from the ocean,” says Steve Palumbi, a Stanford University biologist, “and that has almost certainly changed the ocean in fundamental ways.”

But the urgent need for large-scale conservation efforts is on a collision course with economic pressures to expand fishing even further, according to a 2003 report by the Pew Oceans Commission, an independent expert panel funded by the Pew Charitable Trust, as well as preliminary reports from members of the Bush-appointed U.S. Commission on Ocean Policy. Americans are eating more seafood than ever: Consumption was up 7 percent in 2002, to 4.5 billion pounds. Worldwide, more than 130 billion pounds of marine species are caught annually — and that doesn’t include the huge amount of sea life destroyed as bycatch. More than a billion people rely on fish for protein. “We need to change the whole ethic of how we are viewing the oceans,” says Andrew Rosenberg, a member of the Commission on Ocean
Policy, “from a place that we use to a place we care for.”

In September marine biologists Fiona Gell and Callum Roberts of the University of York in England offered a solution, boldly asserting in the journal Trends in Ecology and Evolution that at least 30 percent of the world’s ocean habitat must become safe zones for marine life. It’s a practical, not a sentimental matter, they contend. After studying 60 no-fishing zones around the world, Gell and Roberts discovered that the fish there live longer, grow larger, and produce more young than those in unprotected areas. Significantly, as populations grow, many fish head into less crowded areas outside the reserve, where fishermen reap the benefits indefinitely. “It’s a no-brainer, really, isn’t it?” observes Roberts. “Like money in the bank producing interest.”

An example: In 1994 large areas on or near Georges Bank, southeast of Cape Cod, were declared off-limits to fishing for species such as cod, yellowtail flounder and haddock, to give these depleted stocks a chance to recover. By 2000 the devastated scallop population on Georges Bank had increased 14-fold. Though the areas remain closed for finfish recovery, the scallops being harvested on the outskirts of the no-fishing zone have revitalized the once-moribund industry.

Prohibiting fishing in one-third of the ocean may seem extreme, but until recently it was the natural state of affairs. The sea was full of places too remote, too deep or too dangerous for fishing boats to venture; there, marine life spawned in peace. Advanced fishing technologies changed that. “We’ve eroded all the natural refuges,” says Roberts. “Now we’ve got to turn the clock back two hundred years and recreate them.”