Iraq, Science and the Elusive WMD

Proof of a bioterror program is hard to come by. In the Iraq conflict, impatient politicians and media jumped to conclusions. 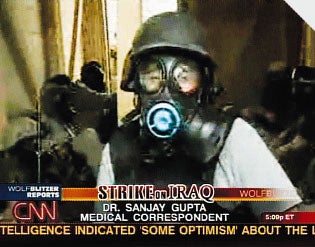 A March 20 CNN report from Kuwait: Even outside Iraq, fear of WMD was intense.

On February 5, before a rapt U.N. General Assembly, U.S. secretary of state Colin Powell presented the case for invading Iraq. Using an array of evidence — satellite photos of suspicious activities at missile facilities, sinister audio tapes of Iraqi scientists — he delivered a clear message: Iraq’s weapons of mass destruction program not only persisted but was tailored to evade U.N. inspections. Notably, Powell cited seven mobile labs, each capable of producing “enough dry biological agent in a single month to kill thousands upon thousands of people.”

Twelve weeks and one invasion later, U.S. forces discovered two trailers that matched Powell’s description, equipped with compressors and fermenters that could be used to cultivate anthrax, botulinum toxin or other agents. Reporters and government officials, including vice president Dick Cheney and the normally reticent CIA, trumpeted the find, calling the trailers evidence of an Iraqi bioweapons program. Later, though, came an about-face: The administration’s own inspections experts said it was not yet possible to tell whether the trailers were weapons labs or something more mundane, such as hydrogen production facilities (see graphic above).

The problem is that unlike nuclear weapons production, which requires huge facilities like North Korea’s Yongbyon plutonium refining plant, a bioweapons program is so contained it’s easy to hide: All that’s required is a few vials of toxin and standard lab equipment. When Iraq’s al-Hakam facility produced 8,425 liters of anthrax in 1990, two of its fermenters were borrowed from a veterinary lab. “Simply looking at the equipment isn’t enough,” says former U.N. weapons inspector Terrence Taylor, “unless operators were careless enough to leave a trace.”

The two trailers found in April and May — which at press time remained the only potential evidence of Iraqi bioweapons production — held some equipment that matched Powell’s descriptions, but items critical to weapons manufacturing were absent, according to a report issued in October by the administration-sponsored Iraq Survey Group. The identification problem was exacerbated by looting and by possible evidence tampering (items in at least one trailer had been bleached). “Maybe there was a piece of equipment that somebody ripped off the day before,” says Ewen Buchanan of the U.N. Monitoring, Verification and Inspection Commission.

The Iraq Survey Group has years of work ahead — examining everything from dairy to detergent factories, perusing old documents, seeking out Iraqi scientists who will talk — to piece together whether Saddam Hussein possessed a WMD program at the time of the U.S. invasion. Ultimately, answers should emerge. “The people who are doing the survey work don’t have a lot of agendas,” says David Albright, president of the Institute for Science and International Security, “so they’re going to be pushing something truthful.”